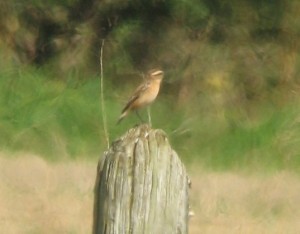 Fourteen of us started from the pub car park, seeing a Raven, House Martins, and Swallows above us. As we walked up Hobbs Lane we had good views of two Kestrels and a Sparrowhawk. Around the tanks the usual suspects were seen, Mute Swan, Tufted Duck, Mallard, Coot, and Great Crested Grebe, with a Cormorant on each buoy. As we left the tanks, five Grey Herons had gathered and were standing in one field together, looking like soldiers on sentry duty. Further along, Great Spotted Woodpeckers were seen, and as we approached our coffee stop by the old barn, two birds were seen briefly and heard calling – Hobby/ Kestrel? It was only as we got nearer that we confirmed that they were Hobby, and a tick for the patch, this being the first time Hobby had been seen on this walk. We were seeing Buzzards throughout the walk, at least six or seven, with also four Jays and two Green Woodpeckers seen just after our stop. Towards the end of the walk four Whinchats were seen, perching on old railway sleepers acting as posts. They were at a distance but confirmed by scope views and photos – a brilliant sighting and again a first on this walk. We also had Wren, Robin, Blue Tit, Great Tit, Chaffinch, Goldfinch, Blackbird, Stock Dove, Nuthatch and Meadow Pipits, to give total of 38 seen or heard. Geoff Harris  (Thanks Geoff for leading)