Peregrines used to breed in the Avon Gorge many years ago but along with many other species of birds of prey, they went into sharp decline due to the impact of harmful pesticides in the food chain. The situation recovered in the 1970’s and breeding Peregrines returned to the gorge in 1990. The Club has organised and led breeding watches of these birds since 1991. (see foot of page)

The Avon Gorge Peregrines hatched – 3 chicks, and they were ringed 24th May 2019
Photos attached of each one

The site at Finzels Reach produced one chick, which has yet to fledge
The other nest sites – Portishead, East Bristol, Clevedon, and nr Langford. have not reported this year. 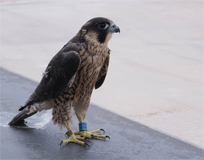 The Peregrine Watch location is on Clifton Downs, at the south end of Circular Road, just north of the sharp bend where Circular Road meets Ladies Mile.

Each year the Avon Gorge peregrine chicks are ringed at three weeks old. They have a unique metal identification ring fitted on their right leg and a blue plastic colour ring fitted on their left leg. The colour ring has a unique two-letter combination, such as GY. Ringing the chicks under a special schedule 1 licence; peregrines have extra protection that common birds don’t have and require a licence to visit their nests. The colour rings are spotted by people when the peregrines fly away from the Avon Gorge and set up home elsewhere. They are often photographed with their rings in flight or when they perch on buildings and cliffs. Occasionally they are found dead and their ring details are submitted to the British Trust for Ornithology. Chicks that have fledged from the Avon Gorge have later been spotted in the Chew Valley, on Tewkesbury Abbey and in east London. Their movements are helping us discover where peregrines travel from the Bristol area and how they are helping to increase their populations in the Midlands and the north-east of England.
If you spot any colour-ringed peregrines, please report details to the British Trust for Ornithology via Euring.

The gorge Peregrine nested as usual, there were 2 chicks that fledged 17th June.
The site at Finzels Reach produced 2 chicks and they too fledged on 17th June

The Peregrines did not produce any young – egg predation suspected.

The Peregrines hatched 3 and fledged 2 – rings LY and LZ

The Peregrines had 3 chicks in 2015 which were colour-ringed JS, GZ JV. The nest was on the Leigh Woods side for the first time in 20 yrs.

The Peregrines had one chick in 2014 and was colour-ringed with a blue ring and black letters CH. If the chick is spotted during its lifetime we will know where it was hatched without having to catch it again. During the next few years the young bird will begin to venture further afield, exploring other parts of the city and country, and moving up to a few hundred miles away.

In 2013 the pair of Peregrines in the Gorge reared four chicks which all successfully fledged and left their nest in June. They were not ringed this year. 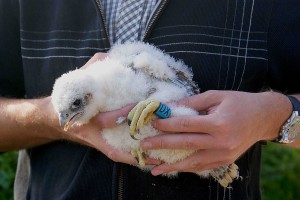 In 2012 the peregrines reared three chicks in the Avon Gorge. They were ring

ed on the 21st May at around 3 weeks old with blue colour rings and black letters DX, DY and DZ. The first chick fledged on June 13th, followed by the other two a few days later.

Meanwhile, a single male chick fledged in the centre of Bristol by Castle Park. Not long after fledging it got into trouble when gulls mobbed him. He almost drowned. Ed Drewitt brought him home (almost dead), dried him out, and by the next day he was fighting fit. He was released the next day and was seen throughout the summer and autumn with his parents learning how to hunt.

In 2011, the Peregrines reared another five chicks! The young birds were ringed towards the end of May and given colour rings DF, DG, DH, DJ, FK.

In 2010, the Peregrine chicks were ringed in mid-May. There were five chicks which is unusual for Peregrines, although a brood of five was recorded at this site in 2008. When a female lays a clutch of five eggs, it is common for her to repeat this in future years. The chicks were colour ringed BS, BT, BV, and BY. They were all healthy, even weights and looked to all be female. The event was filmed for the BBC’s Springwatch and appeared on our screens at the beginning of June. All five chicks fledged successfully.

A brief story on how it all began.

It began with a wicked deed and grew into one of the crowning glories of Bristol’s wildlife scene – the BOC’s Peregrine protection effort in the Avon Gorge.

Back in 1990, a small number of local bird-watchers had been entranced by the return of Peregrine falcons to a cliffside eyrie near Sea Walls. Among the watchers were Tony Scott, Robin Prytherch and Alix Lord (and apologies to anyone I have omitted). That year Alix and I went with the BOC on a spring holiday to Fair Isle while Robin and Tony nobly stayed behind. It was a wonderful trip, made sadly even more memorable by a message to Fair Isle from Robin: some mindless thug had clubbed the young falcons to death in the nest.

That, as they say, did it. A group of BOC Peregrine fans vowed that should never be allowed to happen again and plans were laid for the watch that has continued, in varying forms, to this day.

The first vigil was in 1991, with a delightful, keen post-grad university student, memorably named Tertia, answering our call for someone to coordinate a watch on the nest. A team of volunteers from the BOC, the Hawk and Owl Trust and many non-attached individuals came together to fill the rota. (BBC Wildlife magazine kindly lent a mobile phone – the size of a car battery and twice as heavy – that would have cost around £1200 to hire for the 10 weeks of the vigil! How times change). There followed 1500 hours of Peregrine watching, note-taking, alarms and occasionally unpleasant confrontations with those who saw Peregrines as no more than murdering vermin. But, of course, it all ended happily, with three young falcons successfully fledged – and the obligatory party when they did.

I took over the rota-organising for the next few years – Tertia had moved away – and the rest is happy, happy history. The Peregrines had returned to a cliff-face they had vacated something like a century before and the BOC had helped them to stay. We hoped, with fingers crossed and wood touched, that maybe, just maybe, the Peregrines would become a Bristol sight-to-see. But I doubt that any of us would have forecast that 20 years on, they were still thriving under the watchful eyes of their human friends. And that I would be writing this wildlife story with such a happy ending.