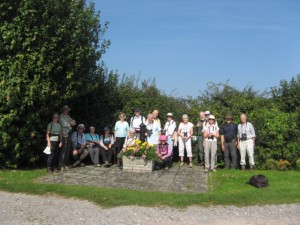 This was asplendid weather day. The air was still, the sky a light blue, the sun was warm and there were 19 walkers all eagerly waiting for the off. While walking across the cricket field we admired a stand of majestic Scots Pines and then descended the hill leading to the village of Tockington. There were a few birds noted on the way including many Pied Wagtails on the cricket ground and several Crows, a Robin, House Martin, Great Spotted Woodpecker, Swallow, Wood Pigeon and Jackdaw further on. The paths across the fields were bone dry and we reached our view-point refreshment area, overlooking part of Alveston, having added Blackbird, Starling, Mistle Thrush, Raven, Magpie and Blue Tit. We then followed a footpath behind a row of houses with large gardens and crossed a road, climbed a stile, and then walked beside part of Old Down Country Park, by which time the sun had become rather warm and birds were in hiding, so we added only a few more species to our list, including Lesser Black-backed Gull, Dunnock, Bullfinch and Long-tailed Tit. A total count of 25. (Thanks to David for leading)       David Tombs