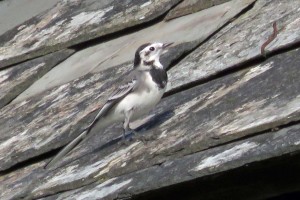 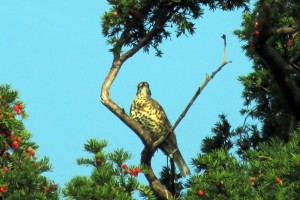 Twenty three people attended this walk on a warm sunny day, covering Tickenham Moor, fields, Land Yeo River, wooded slopes of Tickenham Ridge, and the open pastureland of Cadbury Camp. At the start, many birds were seen feeding around the Tickenham Church yew trees, including two or three Mistle Thrush and a group of three Greenfinch, doing the ‘batty’ flight more usually reserved for spring. An adjacent walnut tree saw a steady stream of corvids – most or nearly all Rooks – plucking the green encased nuts and flying off ; somewhere they must have been dropping them from a height or letting vehicles break them open to get to the meat inside. The subsequent field and woodland walk was generally quieter but a fair number of birds were seen and heard, including Nuthatch, Jay, Goldcrest, and Long-tailed Tit, and a juvenile Hobby (lighter beneath) and many Buzzard soared above (once again the variation in underwing colouration was most marked). On Cadbury Camp were Meadow Pipit, Skylark, and a Green Woodpecker – heard but not seen. Back down on the moor a couple of Mute Swans flew low over the rhynes with a few flying Mallards close behind. A Kestrel, which circled briefly before landing on a telegraph pole, was mobbed by a crowd of Meadow Pipit – keeping their distance, but making their presence felt. A few lucky people saw Clouded Yellow butterflies, and more noticeable were the scores – probably hundreds – of mostly coupled, reddish dragonflies (Common Darters?) sporting and possibly laying their eggs into the water among the vegetation growing on the margins of the Land Yeo. Total bird species seen/heard was 32. Lois Pryce  (Thanks to Lois and Jan for leading).