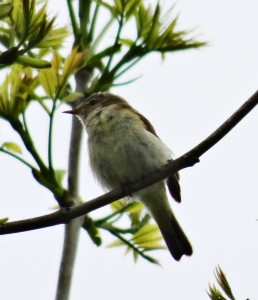 This was a walk in “Stan Country” – one of the many which Stan Wilmott used to lead.      15 members set out across a wheat field to the sound of skylarks – this week against a grey sky.  Blackcaps, robins, blackbirds and wrens were heard throughout the walk – double figures in all four cases.   Some of the time the sound of the M4 was also a constant background but this did not really detract from our enjoyment, though with the increasing foliage,  hearing different species is becoming as frequent than seeing some!  Many chiffchaffs were heard and  some very clearly seen as were, by a few, a pair of bullfinches taking dandelion seeds.  Plenty of magpies were seen, including two chasing a jay. Other birds in abundance were woodpigeons, one flock of 50 feeding in a pasture,  also carrion crows, starlings and a rookery of about a dozen nests. Several willow warblers were heard and a whitethroat, a group of six linnets fluttered  in a hedge and half a dozen swallows were spotted, a couple almost close enough to touch.  The walk ended in sunshine with more skylarks singing as we crossed a final wheat field.  36 species in all.  Thanks to Duncan Gill for leading and for the previous day’s recce, which saved many a step through clayey mud!