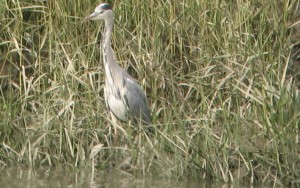 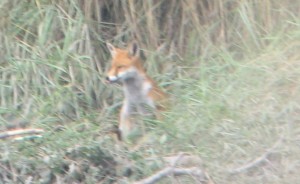 One of Two foxes in the vicinity 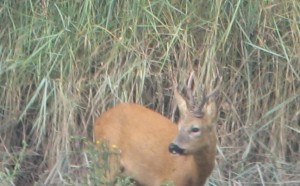 And this deer close by

13 people set out on the bus from Pill, another seven joined us at Abbots Leigh, having come by bus from Bristol, then Jan turned up on her bike, making 21. The weather was perfect. Robins sang as we went along, Rooks and Jackdaws were feeding on the lawn of the bungalow opposite Brackenwood Garden Centre. Raven was heard and two Buzzards heard and seen. In the wood Coal Tit and Goldcrest were calling, and at one point everyone stared across to a dead birch tree engulfed in a fungus – which Our Expert has now indentified as Birch Polypore. On arrival at the river we scanned without success for the Greenshank, but later one lucky person saw it flying out from the near bank and going up river. We counted a total of about 50 Redshank, three Cormorants, many Black-headed Gulls but only one Lesser Black-back. One Common Sandpiper was found, one Lapwing and, to start with, one Heron though the final total was eight. The best spot of the day was a Roe Deer on the opposite bank walking towards a fox, which ducked down into the grass to allow it to pass. Behind the deer was another fox and both foxes sat looking across at us, watching us watching them and knowing that the river was an effective safety barrier! Greenfinch and Goldfinch were noted and we caught up with House Sparrow at the farm and Grey Wagtail and Moorhen on Ham Green Lake, before reaching Pill and following alleyways back to the Memorial Club. Nick noted a total of 43 species.Judy Copeland (Thank you to Judy for leading.)