The evening was a wonderful collection of memories, personal reminiscences, and facts about the history of the club, with a delicious birthday cake for all. Robin Prytherch set the ball rolling by telling us about the Pied-billed Grebe, which initiated the whole project 50 years ago, and which to a young birder (yes, even Robin was one once!) was incredibly exciting, the first time ever it had been seen in the whole of the Western Palearctic. There were tales of romantic encounters when Richard met Rosemary whilst birding, of new birders (Alison Pilling) who enticed their husbands to join, of long-standing birders (Mike Jackson) who had been encouraged to start BBS surveys by John Tully, the latter a tremendous enthusiast who encouraged many. Peter Holbrook, past organiser of the Tuesday group, told us that there were 52 meetings last year under the guidance of Mark Watson. The group’s warm welcome has been the start of many a local birder’s career. Former Club Chairman Mike Lord returned from Cornwall with tales of a successful Chough watch adapted from our Peregrine watch. Jane Cumming highlighted the Avon Birds blog as a well-respected and well-used facility. Ken Hall detailed some of the many and varied trips to France which he had run, and former Club Secretary, Wendy Dickson, who had come down from Northumberland, spoke about birds on her previous home in the Shetlands. The whole evening emphasised the wonderfully friendly, warm atmosphere of the club, and was very ably chaired by Ken Carruthers.
Andy and Sue Black 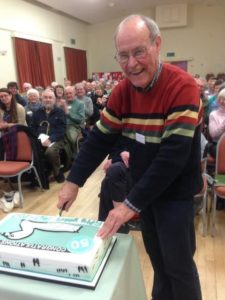 What an enjoyable twitch! Some of the visitors had returned to their former haunts close to Severnside from the Scottish Islands and from the Lizard. As it was an early Spring gathering the local residents were even in their breeding plumage. Eight wise specimens regaled the gathered flock with tales of dedicated research, birding holidays and romance and intrigue. One pair had even met on a BOC walk many years previously. If Black Grouse could talk to their prospective mates at a lek I’m not sure that “Not Bad” would have carried the day, but happily it did. The tale of how the BOC Peregrine watch inspired the locals on the Lizard to set up “Chough watch” was enthralling, and the results spectacular. The last time I saw a Cornish Chough was in Newquay Zoo 45 years ago but now the thought of 50 birds wheeling and sneezing above the headland at Lands End makes a return visit to Cornwall inevitable. Rob Miles