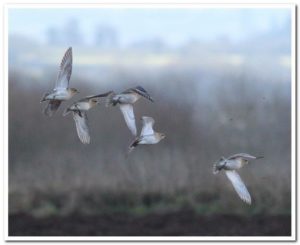 On a rather cold and cloudy morning 18 members (including three new members) met for a walk around Marshfield. As soon as we had crossed the A420 we flushed a Stonechat (one of many Stonechat sightings through the morning) that obligingly perched on a fencepost. As we reached the fields we could both see and hear many Skylarks that were present in large numbers throughout the walk. We made rather slow progress as we had many excellent views of Yellowhammers in both small and large groups. Also we were alerted to the presence of Corn Buntings by their characteristic ‘jangle of keys’ call. There were plenty of Fieldfares, accompanied by a few Redwings in the fields. A flock of about 110 Lapwings sat on a ploughed field interspersed with about 30 Golden Plovers (later on we saw a larger flock of Golden Plovers in flight). Unusually, a single Reed Bunting was seen. Circling back through Rushmead Lane we had views of a large flock of approximately 70 Fieldfares in flight and saw a group of seven Red-legged Partridges. The only raptors seen were Buzzards with, unfortunately, no views of Little Owl. Overall, as the cloud disappeared and the sun came out, we had a very pleasant walk with continuous Skylark and Corn Bunting song and good sightings of 29 species. Sue Kempson