We left Bristol early Friday morning in a gale. Our first notable birds were Red Kites as we drove along the M4. After a brief stop at Services on the M25 to meet up with the rest of the group travelling by car we carried on to Cliffe Pools. We met Lynn Griffiths, a member who had recently moved to the area, who guided us round the pools. The rain and gales worsened but despite this we had good views of Pintail, Shoveler and Goldeneye at our first stop. Further along on a strip of land not under water there was a large flock of Black-tailed Godwits with Dunlin, Redshank and Lapwing. Upon reaching the Thames side there were Avocet and Shelduck on the foreshore.
Saturday proved to be slightly better weather-wise, but there were still gales. We first went to the Riverside Country Park where after leaving the minibus we had to dive for cover due to a hailstorm which passed through quickly. Along the riverside were Meadow Pipits and Grey Plover. At the point there were more Grey Plovers, Oystercatchers, Wigeon, Teal, Shelducks, Godwits, Redshanks and Dunlin. We went on to Bedlams Bottom where there was a nice flock of Avocet and more waders. 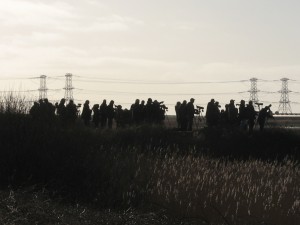 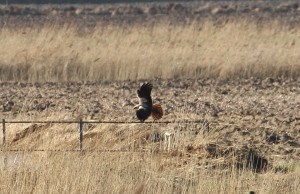 and a nice surprise was a pair of Green Sandpipers disturbed by the harriers. When we arrived at Elmley Marshes the wind had got up again and we seemed to be blown sideways. Along the path there were many Lapwings, Godwits, Wigeons and Teal. Approaching the hide we had to hurry as another storm was brewing. Wading across the submerged bridge to the hide the heavens opened again. We had good views of Brent Geese, Marsh Harriers, Golden Plover and Grey Plover plus many more Lapwings. Leaving the hide the sky was as black as night and the rain came down again. The rain relented and the wind almost dried us off by the time we reached the minibus.
Sunday, and what a difference! There were blue skies and no wind. What a relief! We travelled to Dungeness with a promise of Penduline Tit which had been reported the previous day. On arrival we went straight to the hide where they had been seen but, alas, they were not there. But we had good views of Smew and Little Gull. We left and continued to the beach for lunch where Kittiwakes, 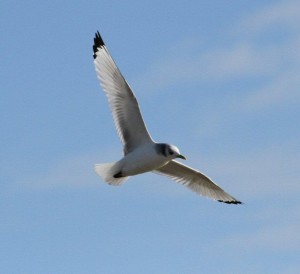 Guillemots and Great Northern Diver were seen. On returning to the reserve two Black-throated Divers were seen on the pools by the road. The missing Penduline Tits were reported at another pool so we went to look for them. After an hour there was no sign of them but we were treated to good views of a Bearded Tit on top of a reed. At the gatehouse our last sightings were of Tree Sparrow and Reed Bunting which was a nice end to the trip. The weekend tally was 95 species which was a pretty good count for a wet weekend.