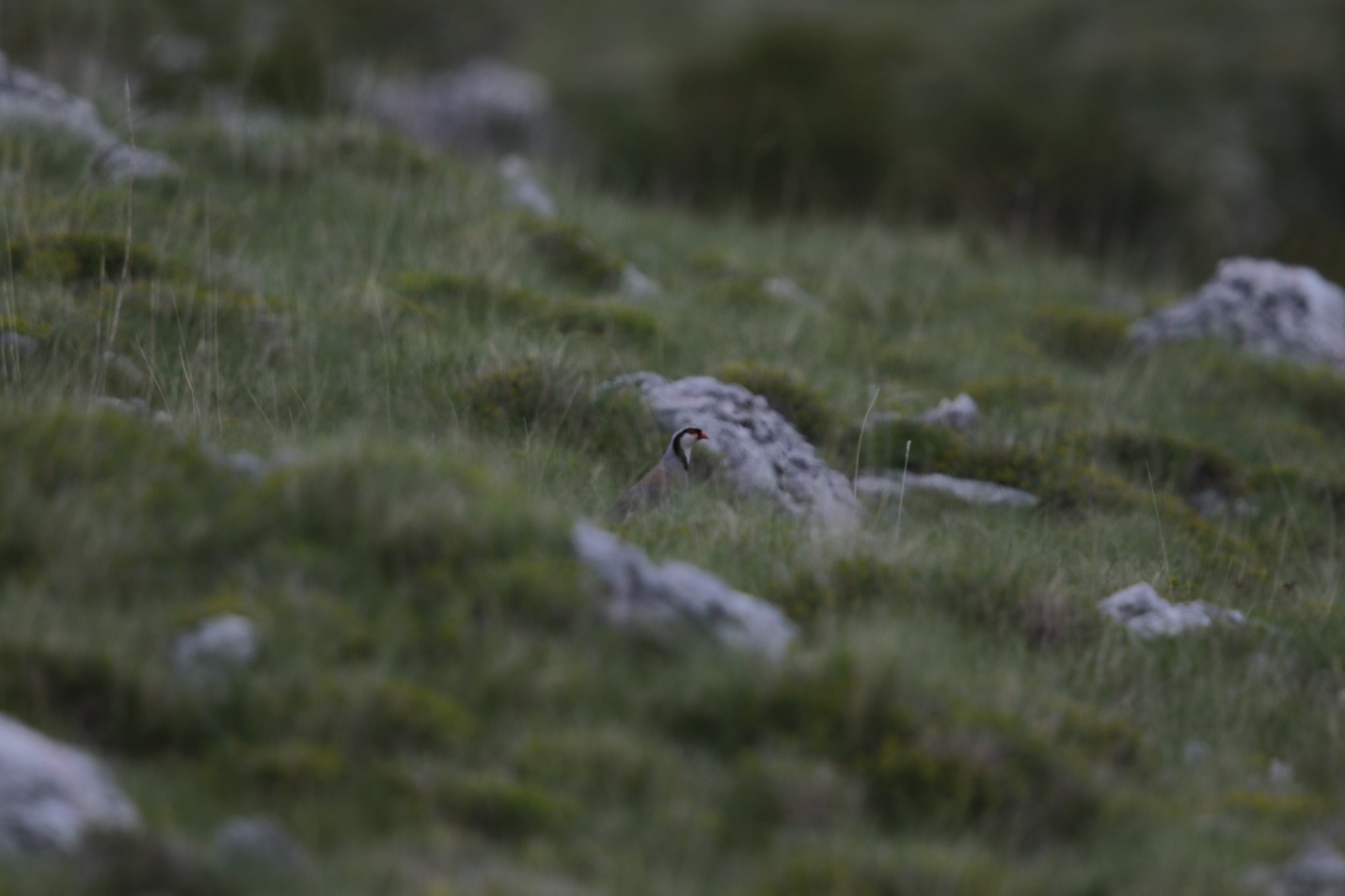 We arrived in Dubrovnik, Croatia on 7 May and drove across the border into Bosnia-Herzegovina. A three-hour drive took us to picturesque Mostar (although many of the buildings still show chunks missing and peppered shrapnel holes from the brutal war this town endured in the 1990s). The scenery was extremely unspoiled, with rivers meandering through rocky valleys and views across to islands dotted about the Adriatic Sea. The weather was moody, ending in torrential rain with dramatic cloud formations. Our first birds seen were several Alpine Swift, hundreds of House Martins (so this is where all ours are) and cracking views of a Nightingale.

On 8 May, from our balcony, we watched Red-rumped Swallows and Pallid Swifts hawking insects above us. We soon noticed a large Honey Buzzard movement along the River Neretva. We headed South to the banks of the River Buna just outside town and what a treat it was. There was no-one else there, the woodland purred with Turtle Doves and Bee-eaters, trilled with Wood Warblers and the sound of bill-snapping Spotted Flycatchers. Six species of Woodpecker were present with Wryneck and Lesser Spotted common, as were Golden Orioles who chased each other around vying for nesting sites. After lunch, we went East of the city and up into the foothills of the Dinaric Alps where Subalpine Warbler and Black-eared Wheatears were numerous. We were around 600 Metres above sea level.  This subalpine region is inhabited by a mostly Muslim population, so one can see mosques and minarets dotted around the plateaus of limestone Karst. The star bird though, after a gap of 43 years for me and a lifer for the rest of the group, was Rock Partridge – we had a couple of sightings of this limited-range bird and were able to study its call which is completely different from Chukar. Our attention was also caught by a male Montagu’s Harrier that drifted past us.

At the end of each day in Mostar we dined in a lovely old restaurant in the historic quarter of town near the Old Bridge. 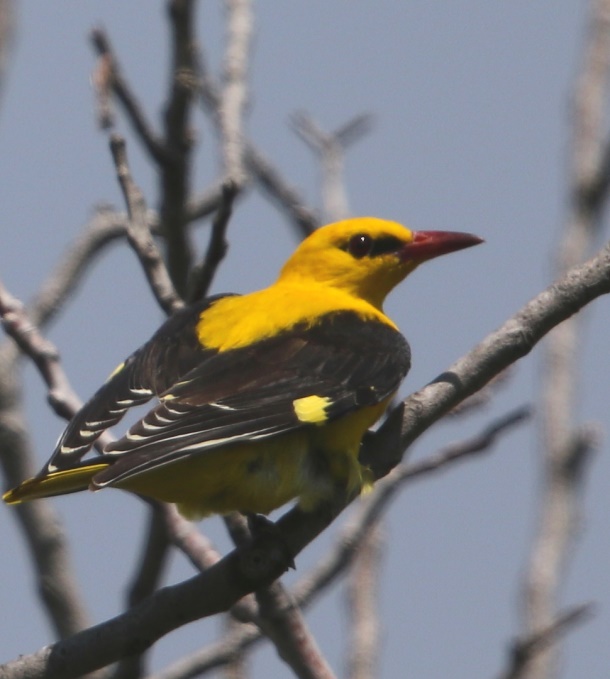 9 May. A day spent in two countries: the morning Bosnia-Herzegovina and the afternoon Croatia. After breakfast, we visited a Pallid Swift colony under the New Bridge in Mostar. We then headed North-east out of town to the fabulous Blagaj Gorge which is the source of the River Buna. Here we enjoyed nesting Rock Nuthatch, Alpine Swift, Crag Martin, Blue Rock Thrush, and a Dipper on a cafe table! Before crossing the border, we visited a small section of Hutovo Blavo Nature Park where there were large numbers of Bee-eaters; we also found a Penduline Tit weaving a nest and several Pygmy Cormorants. Our sortie into Croatia took us to the Neretva Delta, a great place for water birds with wonderful views of some of the Adriatic Islands that were dotted around the sea. Birds seen included Little Bittern, Squacco Heron, Spoonbill, Honey Buzzard, Black-winged Stilt, Avocet, Kentish Plover, Little Stint, Curlew Sandpiper, Wood Sandpiper, Great Reed Warbler, Black-headed Wagtail, Serin and Spanish Sparrows. 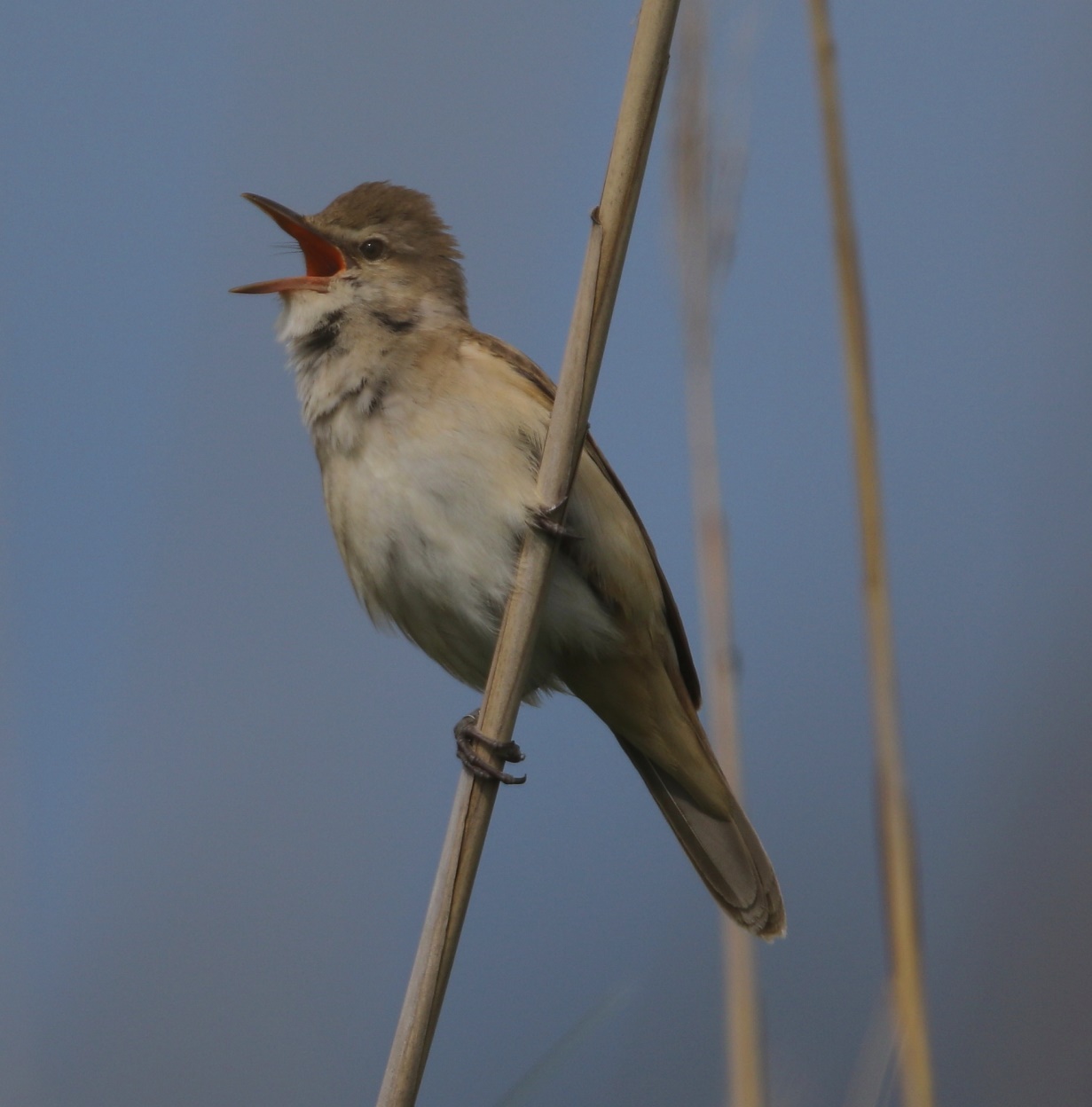 10 May, Bosnia-Herzegovina is the best value-for-money country that I have been to in recent times, one’s money goes far here. Lyn and I rose at 6am to head down to the old town, the Stari Grad district of Mostar, and to the Old Bridge famous for its divers. Since the 16th century folk have dived the 24 metres off the bridge into the raging waters below. Just looking at it was frightening enough, yet they even had a divers club!
In 1992 the bridge was destroyed by shelling and reconstructed after the war in 1997 with materials from the quarry originally used in 1566. We walked along the river valley to the mosque. Golden Oriole’s songs reverberated around the valley echoing off the walls and we had great views of some adult males. After breakfast, we all headed up into the Dinaric Alps on Prenj Mountain to a height of 1300 Metres. The alpine meadows were beautiful with myriads of butterflies such as Duke of Burgundy, Queen of Spain Fritillary and Clouded Apollo and spring flowers such as Gentian and Star of Bethlehem. Several nice birds were observed: Rock Thrush, Rock Bunting, Sombre and Crested Tits and Ortolan Buntings. After dinner, we finished the day off listening to my first ever Slavac Punk band (don’t knock it until you have heard it). 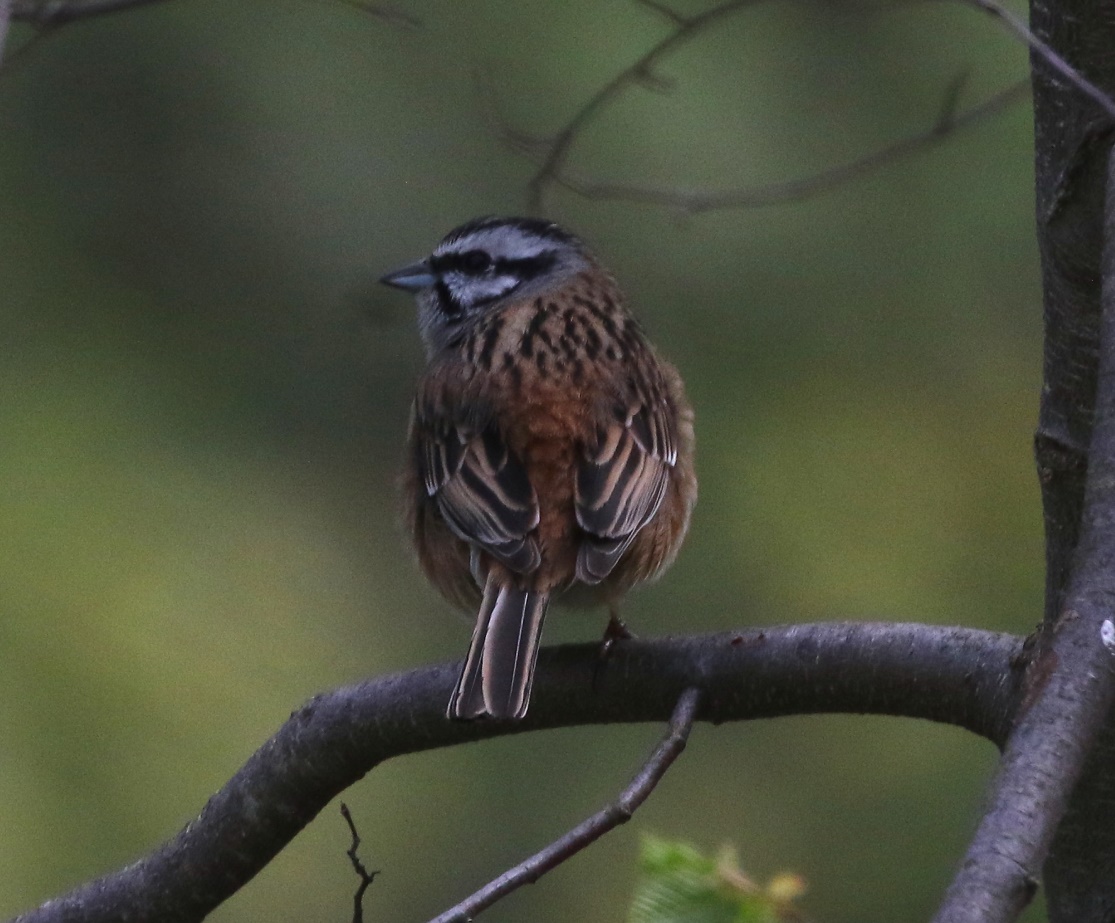 11 May we had a great finale from Mostar on our last night. Lyn and I were treated to a pair of Scops Owls mating on a minaret next to the old bridge in the Stari Grad district. The whole group previously saw the male bird. We spent the day at the picturesque Hutovo Blavo Nature Reserve. In the morning walking alongside the Krupa River looking over the reed-fringed lake. Birds here included Pygmy Cormorant, Collared Pratincole, White-winged Black and Whiskered Terns, Crane, a variety of herons and many Ferruginous Duck. It was also a great place for dragonflies.
In the afternoon we took a small motor boat onto the lake and explored some of its reed corridors, Ferruginous Duck and Garganey gave good views. The lake is fed by mountain water from the Dinaric Alps that flow underground and rise at that spot forming a pristine habitat and a lovely place to be. We saw not another person while out birding all day. 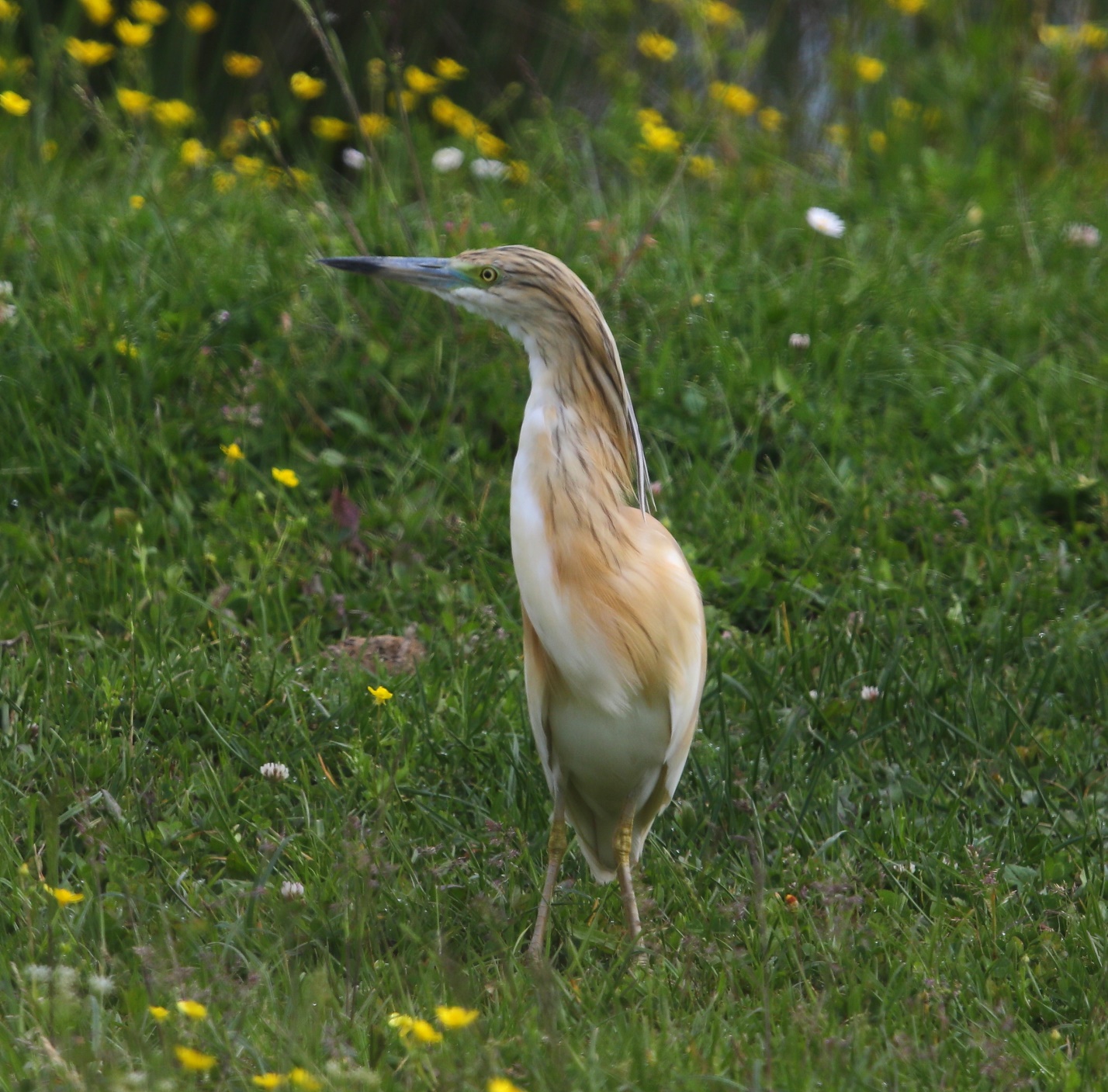 12 May. Our last day in Herzegovina. We arrived in Dubrovnik back into the hustle and bustle of the modern world. Before that though, our first stop in the morning was at the Buna Quarry where there were thousands of Sand Martins and hundreds of Bee-eaters nesting. We also saw a Little Owl with a Sand Martin in its talons. The site was alive with wild flowers and very colourful indeed. We then moved onto the Popovo Polje Karst Fields, these flower-covered green meadows were a perfect place to have lunch and go for a walk, although an inquisitive Short-toed Eagle made us forget our sandwiches. We later stopped at a rocky outpost to buy some honey made by bees that solely pollinate sage. Many of our group had a shot of mead while watching some subalpine birds there. Our final site in the country was Postaja Zavala which is famous for its cave. It was here that the remains of a Leopard were found. There is also a redundant narrow-gauged railway. The old station is now a café, festooned with Spanish Sparrows. We saw several legless Glass Lizards here, very strange creatures indeed. We now looked forward to two days’ sight-seeing in Dubrovnik before heading home late Sunday. 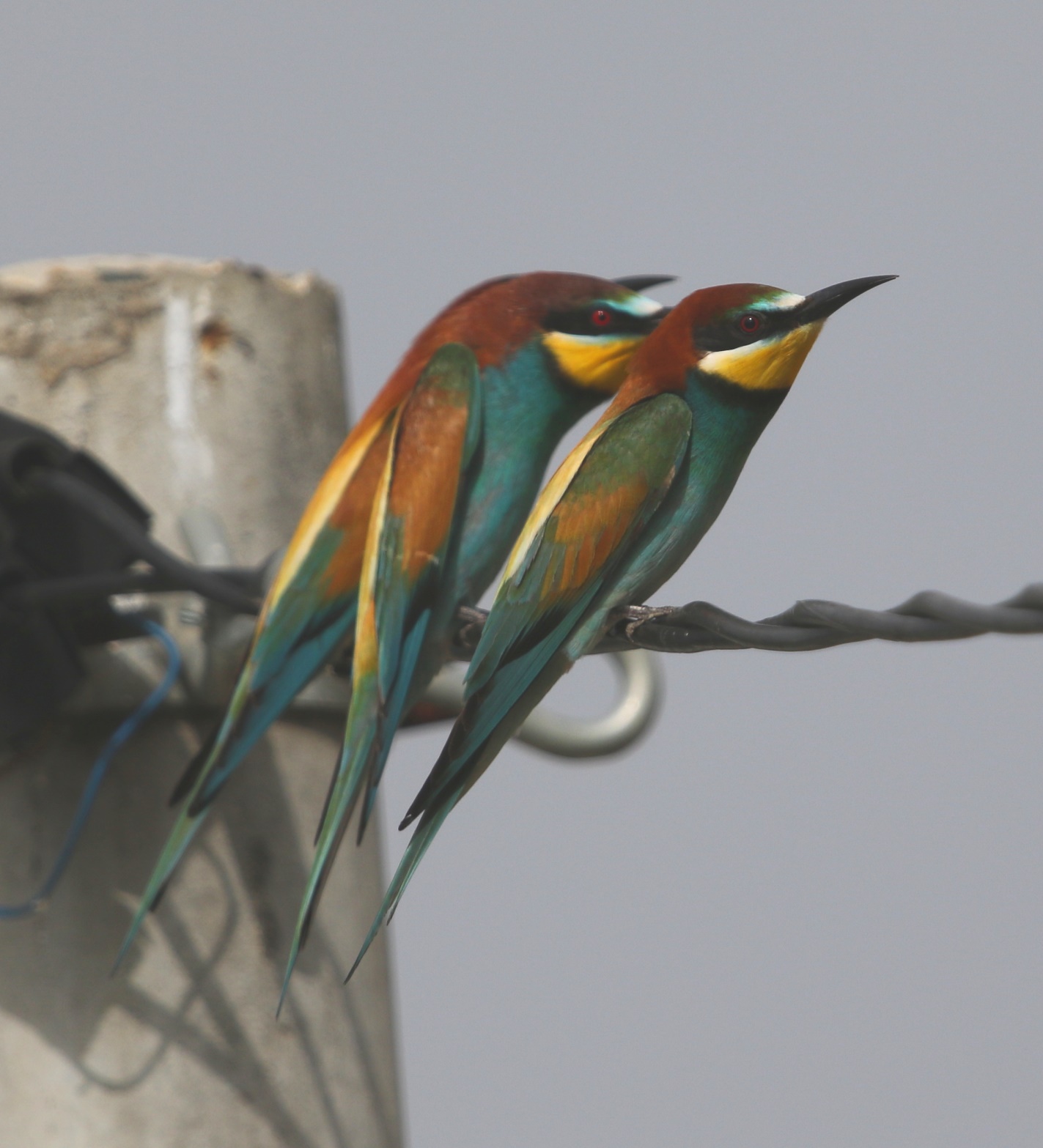 13/14 May were spent relaxing around our resort at Cavtat, Croatia and catching a 45-minute boat ride across the Adriatic Sea past some pine-forested islands to Dubrovnik Old Town. This is a fortified city where one can walk around the top of the wall overlooking the town and the sea. Many Common and Alpine Swifts screamed overhead and came in quite low; one could hear the wind in their wings. We saw a folk band and singers and traditional dancers all put on for the tourists, but the participants genuinely seemed to enjoy performing acts that were deeply rooted in their culture; their faces beamed. At lunch, we were serenaded by the excellent gypsy swing band Gadjo Monouche. Dubrovnik is still a beautiful ancient city. Cadvat was an excellent base on the sea front with coastal walks through pine woods and scrub where we found some migrant Glossy Ibis, Sardinian, Icterine and Wood Warblers, Red-backed Shrikes and black morph Red Squirrels. The village itself is spread out but delightful, apparently, it was once part of Ancient Greece. 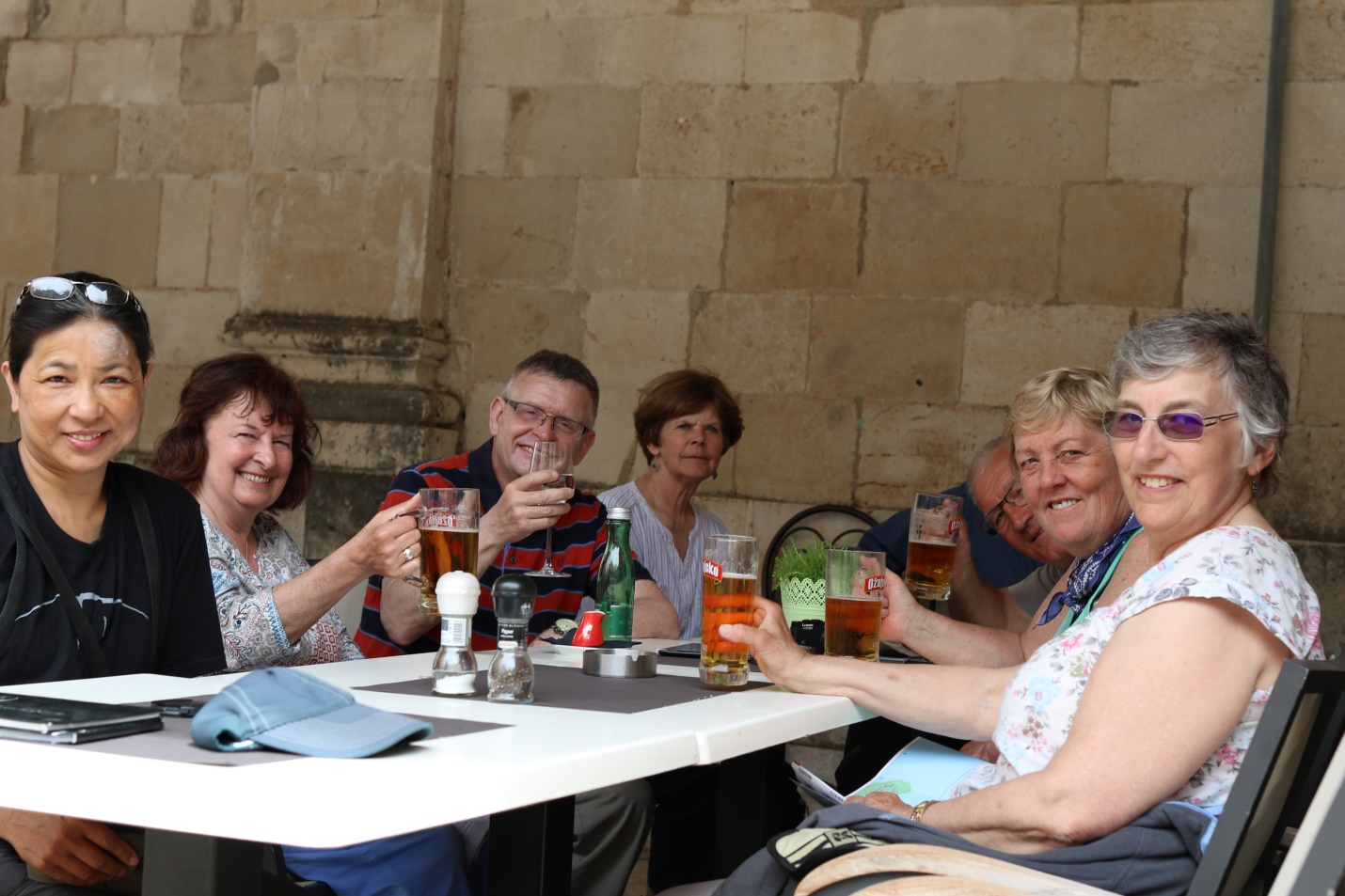 Our trip was arranged and expertly led by Denis Bohm who grew up as the only birder in Herzegovina.  He now lives in London but returns to his homeland for a couple of months each spring to explore this under-watched country further and introduce its delights to visitors.