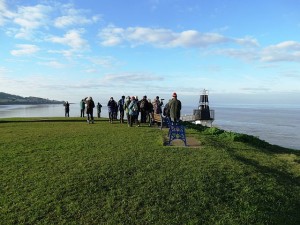 With the period of unseasonal wintry sunny days continuing it allowed us to bask in the warm sunshine but be chilled by the frozen ground. Our group of 23 birders began by looking over the salt marsh towards the flock of Dunlins and Ringed Plovers feeding along the water’s edge. We also noticed a small group of Linnets bending the stems of the grasses while feeding on the seed heads, this very motion revealing their presence. Alas, Battery Point was awash with fishermen and not water – so no Purple Sandpiper but the headland made a splendid watch point to observe from. 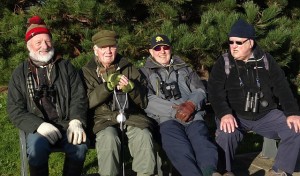 Who got to the seat first!

Up the hill and into East Wood where the common Tit species were all around us, two noisy Nuthatches called to one another and Great Spotted Woodpecker went ‘chip chip’ before flying off. Descending to the jetty and seeing the ongoing work on the new RNLI boat house, I had hoped that the Black Redstart might have put in an appearance but alas not. A further collection of Gulls was counted plus a small flock of Canada Geese waddling their way into the long grass to feed. What disturbed the 30 or so Dunlins was not evident but they showed a pretty turn of speed and agile flight as they flashed in the sunlight before disappearing towards Royal Portbury Dock. The walk along the marina beside the opulent water craft was sparse bird – but not humanity – wise although a further flock of Canada Geese were obviously very used to being fed as they hardly moved as we passed by. Our final birds of the day were; a Buzzard being seen off by Carrion Crows, a distant Song Thrush and a Grey Wagtail up over the roof tops. A total count of 42 species was a fitting end to 2014 for the Tuesday Group. Nick Hawkridge