The promise of a mildish spring morning enticed 31 walkers to enjoy the area around Hambrook. We waited for the Dipper to show at Bradley Brook and just as folks had given up it duly arrived and gave everyone time to admire it. When most had moved on, two Kingfishers were spotted sitting on a branch before flying off. Heading towards Moorend Chiffchaff and Blackcap were added, with Blue Tits and Jackdaws on the way towards Winterbourne Down and Winterbourne. All the birds were in fine voice with Robin, Great Tit, Wren, Dunnock, and House Sparrow added into the mix. By the time we reached Bradley Brook and Monks Pool Nature reserve we had added Long-tailed Tit, Greenfinch, Buzzard, Kestrel, Goldfinch, Jay, Skylark, Great Spotted Woodpecker and Green Woodpecker. 62 Jackdaws were seen and generally in pairs. Mallard were enjoying the Bradley Brook and overhead were Herring Gull and Lesser Black-backed Gull. This walk was lovely and not diminished by the mud or the tricky stiles where Margaret G did a very good acrobatic performance of a near back flip before being caught by two of the men. As we neared the end of the walk three Canada Geese flew over the pub, making a total of 31 species for the morning. We were surprised not to see any Grey Wagtail on the Brook but as were walking back home a pair flew up river. 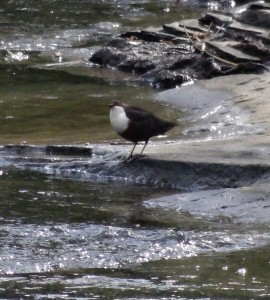