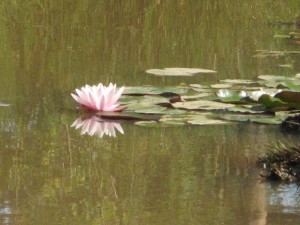 Unlike previous years when the rain has been incessant or in deluge form, today was hot – hot – hot. Renowned for its lung-busting hill at the finish it was no surprise that only eight brave souls made the effort. From the shady side of the car park we had good views of Coal and Blue Tit, but special mention to the Nuthatches that played chase into the trees directly above. Along the lane towards the Chimney, the song or rather half the song of a Blackcap was heard – ‘it must be close’ and it was, throat pulsing to produce its liquid refrain. Nothing avian on the pond, but one splendid water lily, Common Newts on the surface, (we counted ten) and a Broad-bodied Chaser, fast and furious – out from its reed stem patrol around the area and back onto the stem – what a fat, powerful, powder blue body and swept wings he had. Spotted Orchid along the path down into the woods above the farm, where the first of the Raven was heard, and the first of six Chiffchaff called close by – very brave. A welcome rest in the shade for coffee and ‘I spy Swallows and House Martins’. Into Harptree Combe with more Chiffchaff and Blackcap calling, numerous Wrens, an obliging Treecreeper posing for us all, and a Song Thrush singing us out onto the road. Up through the village and our expected scream of Swift materialised, but it wasn’t until we’d climbed off the road that we got to do a proper count which was twelve. We admired a food-carrying Grey Wagtail, who refused to dive down towards her nest until we’d all got well clear. The final climb, with frequent rests to admire the view over CVL, a final Buzzard, a single Pied Wagtail and a couple of Linnets, finished our total at 29. Well done to all the walkers for ‘surviving’ this hot day and to Geoff for leading this beautiful walk. Nick Hawkridge