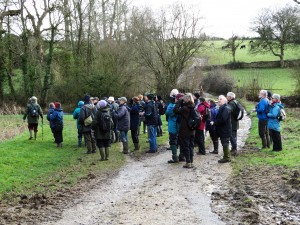 Thirty three is a very respectable total for a Tuesday walk and an even more respectable number for lunch afterwards.  This walk was the last with our organiser, Hazel Wilmott, before her move to Dorset in two weeks. At the start we had a fine pair of Mistle Thrushes who were searching the grass behind the pub car park and on the wing and Jackdaws – mostly as couples – were riding the brisk south easterly wind. Across from the car park and down a narrow lane, a Robin wanted to play at our feet and a Wren sat atop a thorn bush and blasted forth with full song. A couple of flocks of Starlings (one of over 200) flew over and in passing, attracted our attention to the Redwing in the trees. On the ground close by a Dunnock and above three Bullfinches were noted sitting in the sun, a great attraction for the year-listers. The first Buzzard circled overhead and a Green Woodpecker called and flew over the brook at Hancock’s Well. Our second Buzzard, accompanied by a Sparrowhawk circled together above the trees. Those at the front and middle saw a Kingfisher and a few saw it or another on a post, again by the Avon, a little further on towards Sherston, within whose bounds a Little Egret was spied roosting in a tree. Our final Buzzard was seen off by various Corvids, over 20 of which were Rooks who, when not chasing raptors were busily probing the grass for food. On the final part of the walk we followed The Macmillan Way where the fields either side of the path had plenty of Skylarks, some singing and others playing chase. Our final species was a distant flock of 50+ Lapwings giving us an excellent tally of 38. Big thanks and goodbye to Hazel who led this lovely (and hopefully to be repeated) new walk.