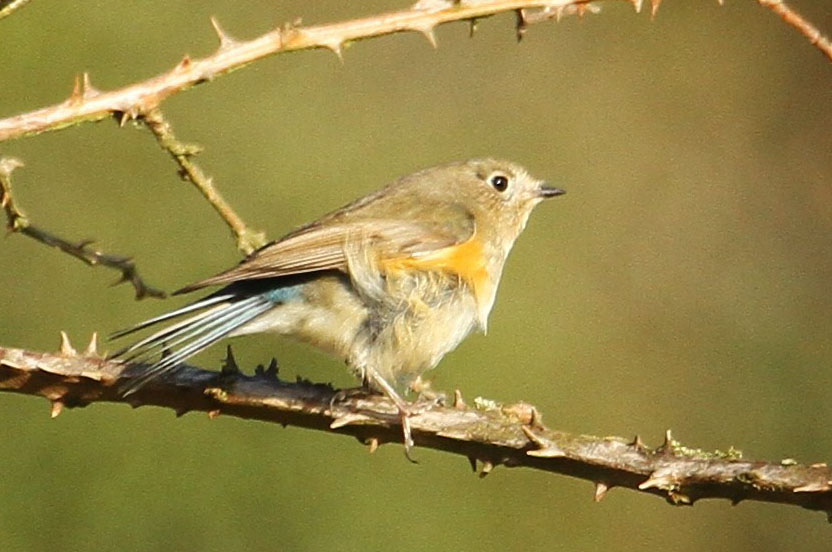 In early February 2014 a Red-flanked Bluetail was discovered in Marshfield, South Gloucestershire. It is a rare bird in the UK, although the species frequently appears on the east coast of England during the autumn migration period. Some juvenile birds disperse south-west from where they hatched in Finland and north-west Russia (instead of flying south-east).

They are a common robin/chat-like birds across Russia, Siberia, and across Asia. At this time of the year they are wintering in south-east Asia. It is possible this first-year bird has been in the UK since the autumn and has been feeding in habitats away from the eyes of birders.

The bluetail at Marshfield was found by John Barnett whose story behind finding this super bird can be found on Bird Guides.

If you would like to see the bird, follow Martyn Hayes ‘The Birds of South Gloucestershire’ website which gives more details on the bird’s location as well as photos and film of the bird.

The club’s very own Steve Hale has amalgamated club members’ photos of the Marshfield bluetail on his Avon Bird blog.

More information on the Red-flanked Bluetail, known internationally as an Orange-flanked Bush-robin, can be found on the ARKive website and the Birdlife International website.

While in Beijing, China last spring the club’s chair Ed Drewitt spotted a number of Red-flanked Bluetails in the local parks as they were passing through on their migration to northern parts of China, Mongolia, and Siberia. This one below is one of the birds he spotted and photographed.