2017 – Morocco – Mike and Elaine Landen with Mark and Sue Watson

On 27 January 2017 the four of us left Bristol on a flight to Marrakesh in Morocco for a two week holiday. The aim of the holiday was to see different parts of Morocco where we hoped to enjoy the scenery, see something of the culture, see some interesting and new birds, take some photographs, and most importantly have a good time. We organised our own flights and accommodation in Marrakesh for one night at the start of the holiday and three nights at the end. The main part of the holiday however was organised by Gayuin Bird Tours which, as far as we know, is the only Moroccan based birding company.

We had taken advantage of using a transfer from the airport to Riad Karmela where we stayed for the four nights in Marrakesh. This was just as well as finding our Riad would otherwise have been extremely difficult. Our taxi driver took us as near to the Riad as possible and there was a man waiting for us with a handcart to carry our luggage and to guide us through the very narrow and busy streets to the alleyway where the Riad was situated. The Riad itself was excellent and we were given a briefing as what and what not do in Marrakesh which was invaluable when walking around the city. 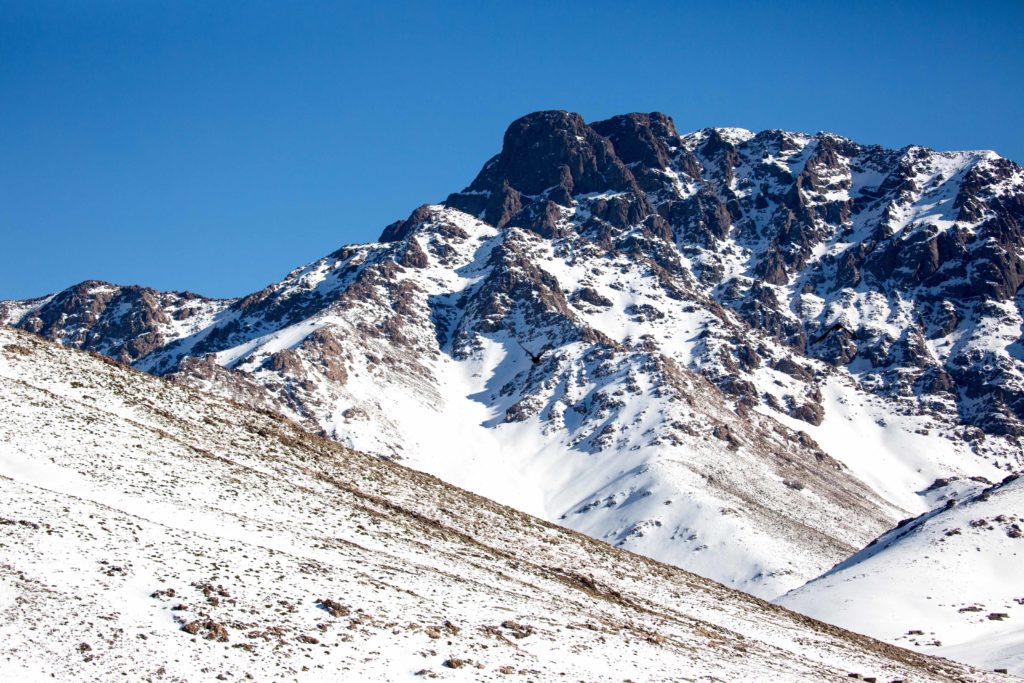 The next morning we were met at the Riad by our guide Brahim and set off towards the Atlas Mountains We made our first birding stop just outside Marrakesh and saw Moroccan Magpie, Long- Legged Buzzard, Little Ringed Plover (on passage). Then it was on to the ski resort of Oukaimeden where we had beautiful views of the mountains and saw some very nice birds including Crimson-winged Finch, Atlas-horned Lark, and Black Wheatear, Rock Bunting and a large mixed flock of Alpine- and Red-billed Choughs. We ate lunch, cooked outside, in glorious sunshine alongside a frozen lake.

The following day we had a long drive to Boumaine de Dades but we had time for a stop to successfully find Levaillant’s Green Woodpecker in an apple orchard where the keeper generously shared his mint tea brewed over a wood fire. 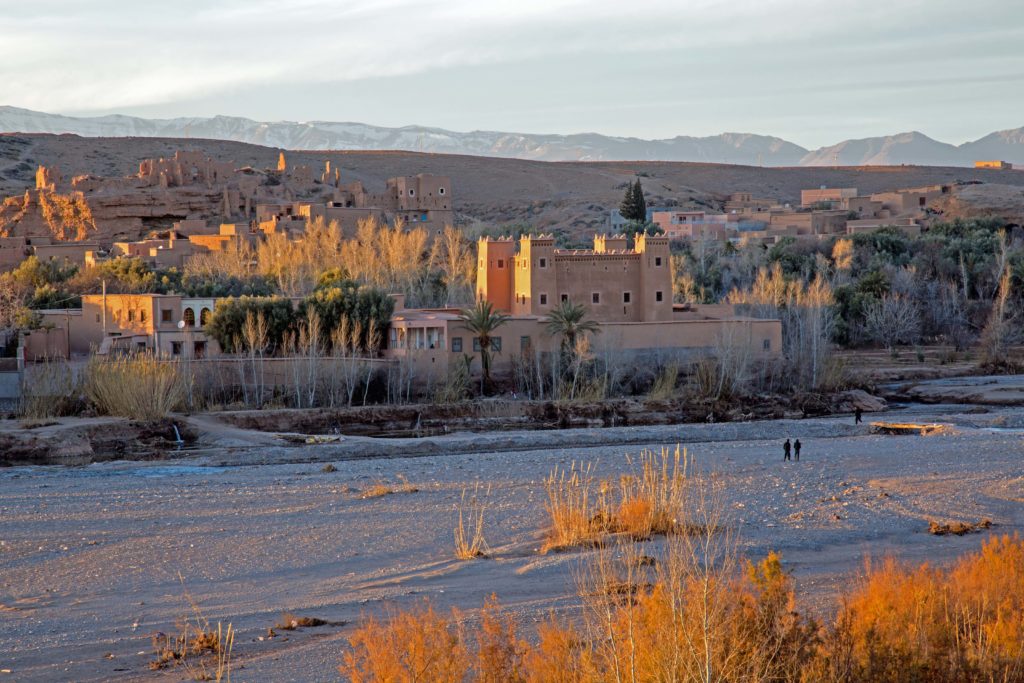 Nearby a large tree dripped with Great White Egrets. During the next two days we had a number of ‘lifers’ for all of us; these included  Magreb Wheatear, Red-rumped Wheatear, Thekla Lark, Thick-billed Lark, Temminck’s Lark, Desert Warbler, Trumpeter Finch and Pharoah’s Eagle Owl. Then it was on to the Sahara Desert via the Togra Gorge seeing several species including Blue Rock Thrush en route. We stopped to find the Scrub Warbler and then drove to our hotel with views of the highest sand dune in Morocco. The views of the sand dunes were spectacular, especially just before sunset. 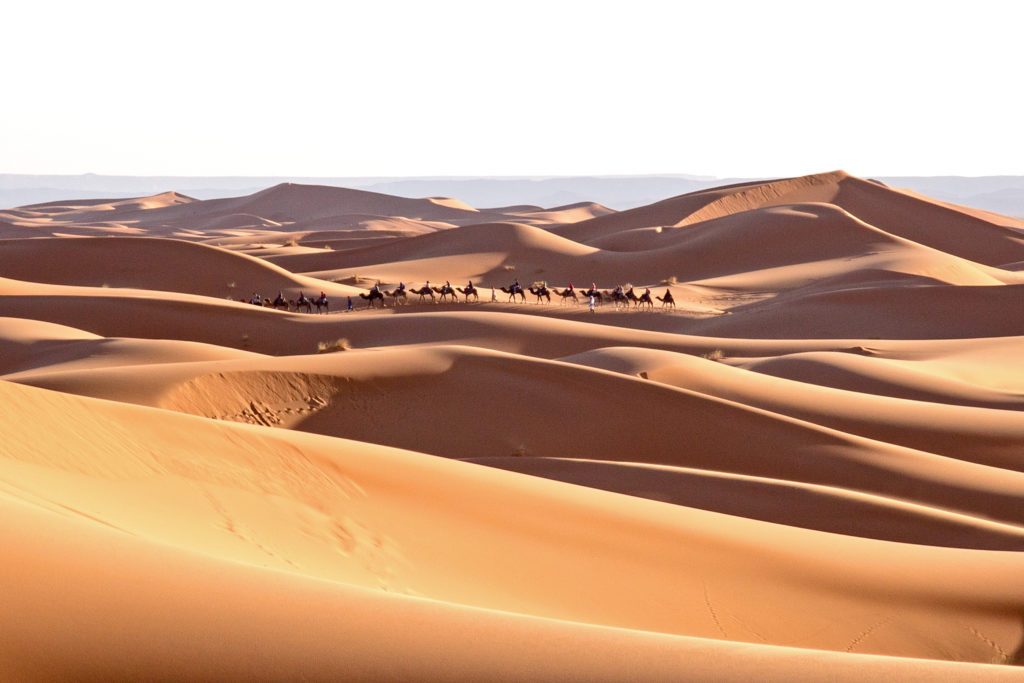 The next day we had a 4-wheel drive vehicle for our journey into the desert, which was particularly enjoyable as it was a comfortable 23/24 degrees C and the birding was excellent and the desert scenery impressive. Some of the more notable birds we saw were Spotted Sandgrouse, Crowned Sandgrouse, White-crowned Black Wheatear, Brown Necked Raven, Desert Sparrow, Bar-tailed Lark, Hoopoe Lark and Desert Warbler. 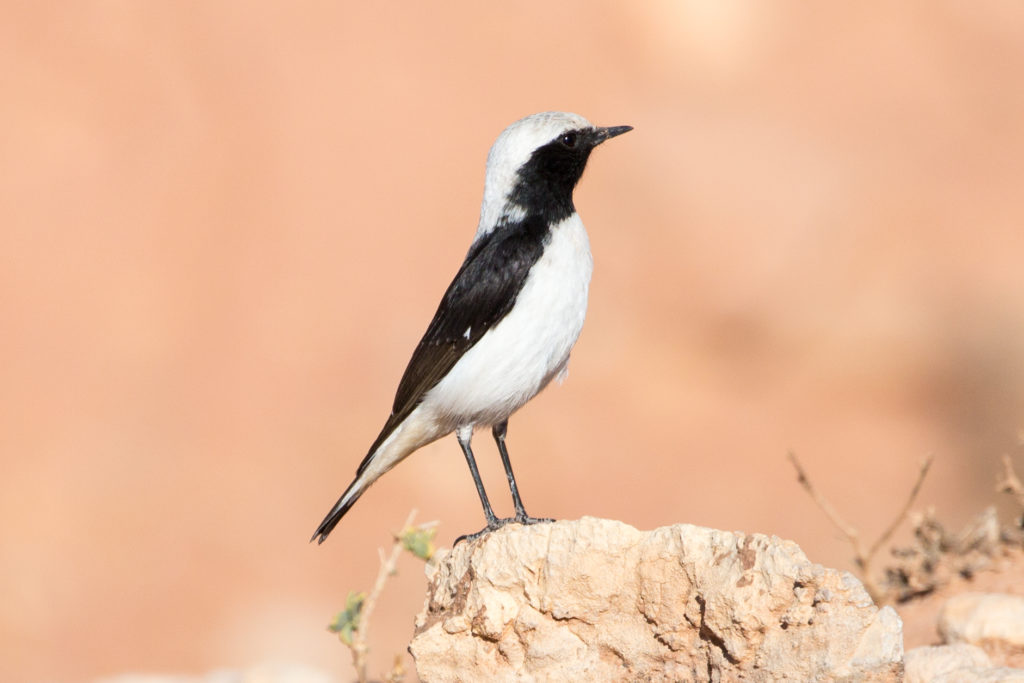 Brahim’s father owns a fossil shop in the town of Rissani situated on the edge of the desert and the next day we were invited to have lunch at the shop. His mother had cooked a Berber pizza which was delicious and we enjoyed looking at the fossils. There were also some good birds in the area including Fulvous Babbler, Spectacled Warbler and Lanner Falcon. After we returned to our hotel we saw Tristam’s Warbler, a target bird that we had been looking for during the previous two days, in a tree just a few metres from our rooms! We then had to leave the desert for a long drive through the Anti-Atlas Mountains heading west towards Agadir but, before we left, we felt very privileged to be invited to Brahim’s home where we met his mother who was lovely and very kindly gave us traditional Moroccan tea and cakes. We arrived in Ouarzazate just before sunset which gave us time to visit the nearby lake. We saw White Stork, Ruddy Shelduck and a fleeting view of a Montagu’s Harrier in the fading light. We continued our journey west the next day with some birding en route which included some excellent views of the colourful and unmistakeable Black-crowned Tchagra which is a type of shrike as well as a Moroccan Wagtail. 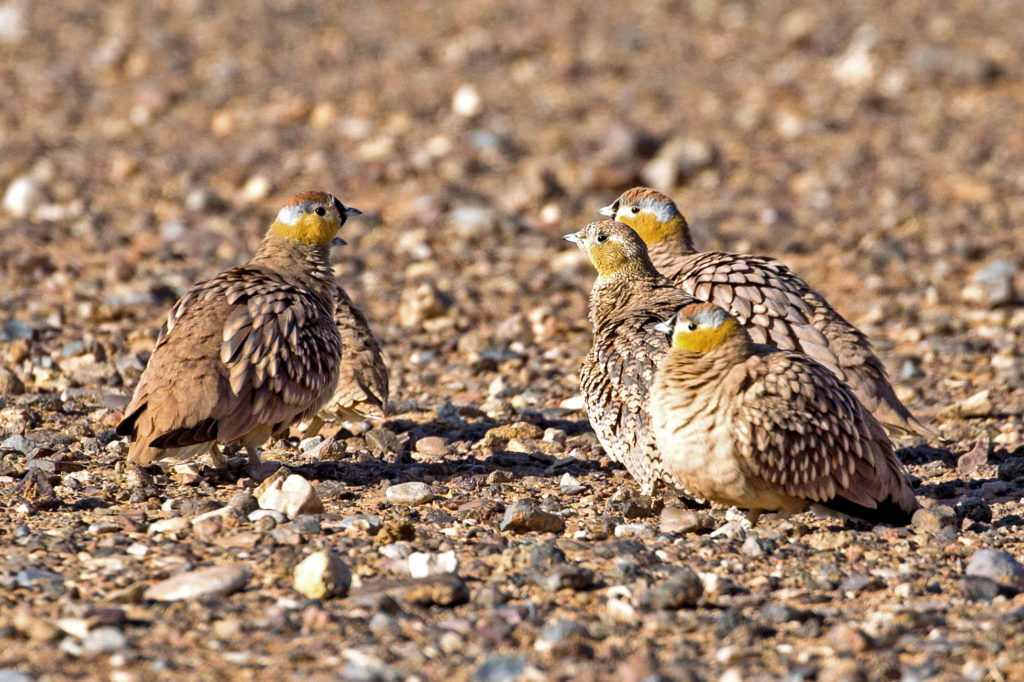 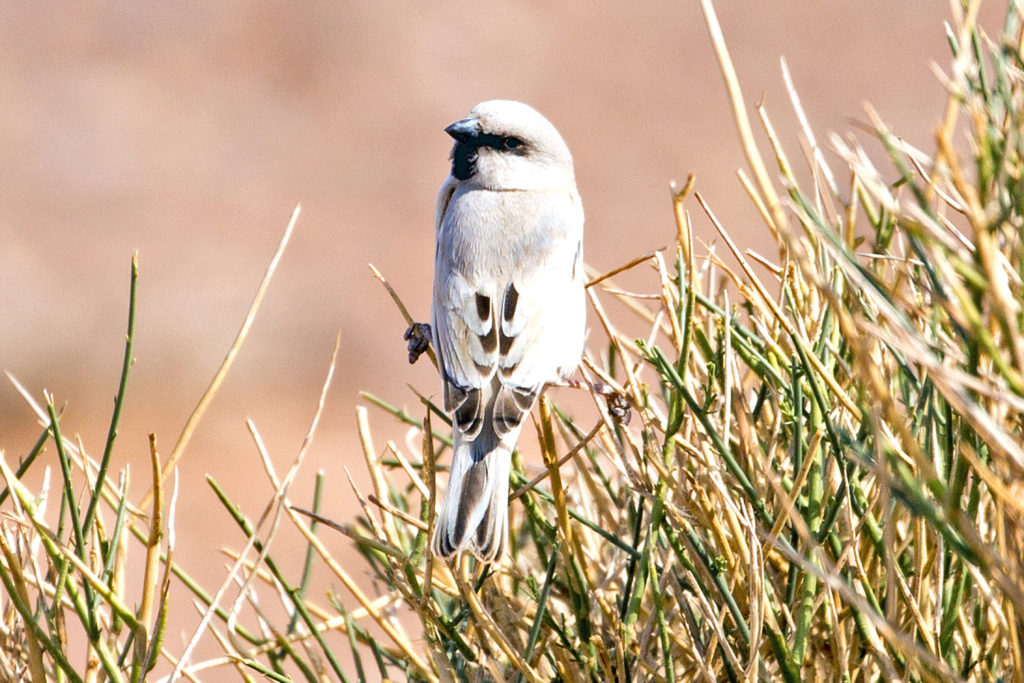 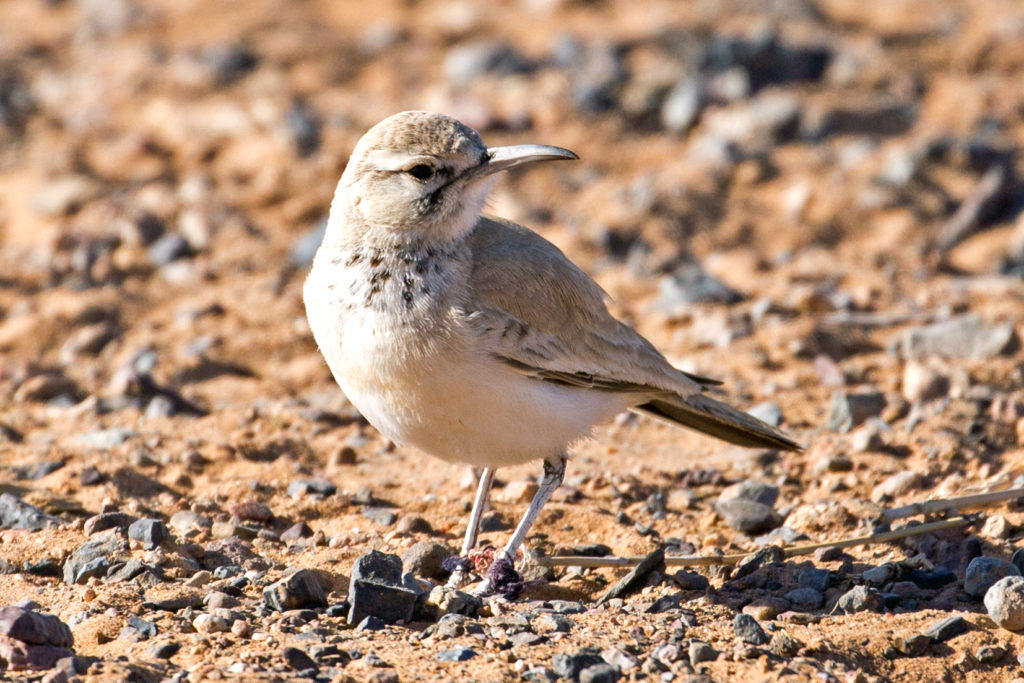 Then it was on to Sidi Wassay, a village about 30 miles south of Agadir for a three night stay. Our target bird for the next day was the Bald Ibis. However on the edge of the village we stopped to enjoy good views of the resident Little Owls which we had seen in poor light as we arrived the previous day. We also stopped at a relatively small field which was full of flowers and also full of Stone Curlews! There must have been at least 50 birds and we wondered whether this is the highest concentration of Stone Curlews anywhere – an amazing sight. Then it was back to finding the critically endangered Northern Bald Ibis. At one point there were only 50 pairs remaining but recent conservation efforts have resulted in increases in the Moroccan population. As we walked through grasslands we were able to see a flock of about 25 birds in the distance and by taking it very slowly we were able to get quite close without disturbing the birds, which by this time were feeding. In the afternoon we added Great Grey Shrike and Zitting Cisticola aka Fantailed Warbler, as well as having a superb view of Moussier’s Redstart and a large flock of circling Bald Ibis. A great day’s birding. 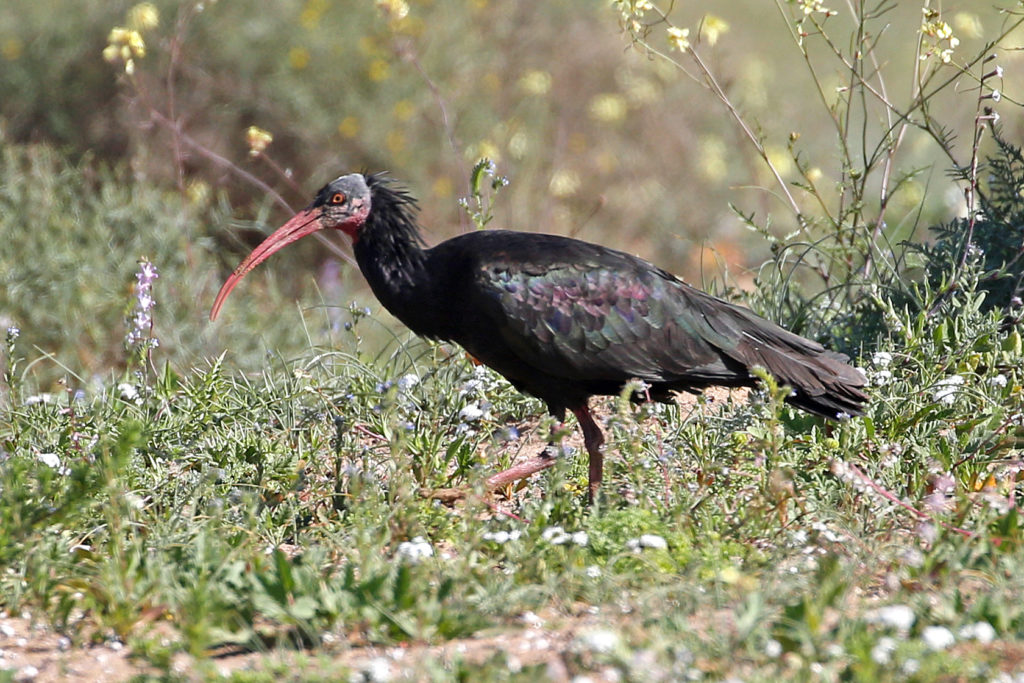 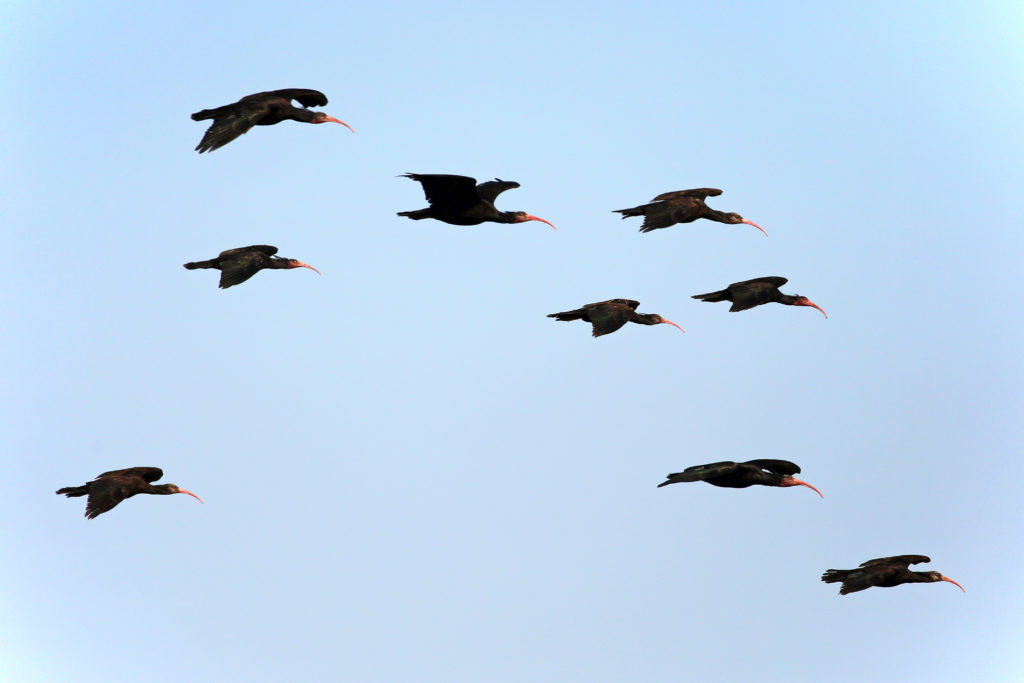 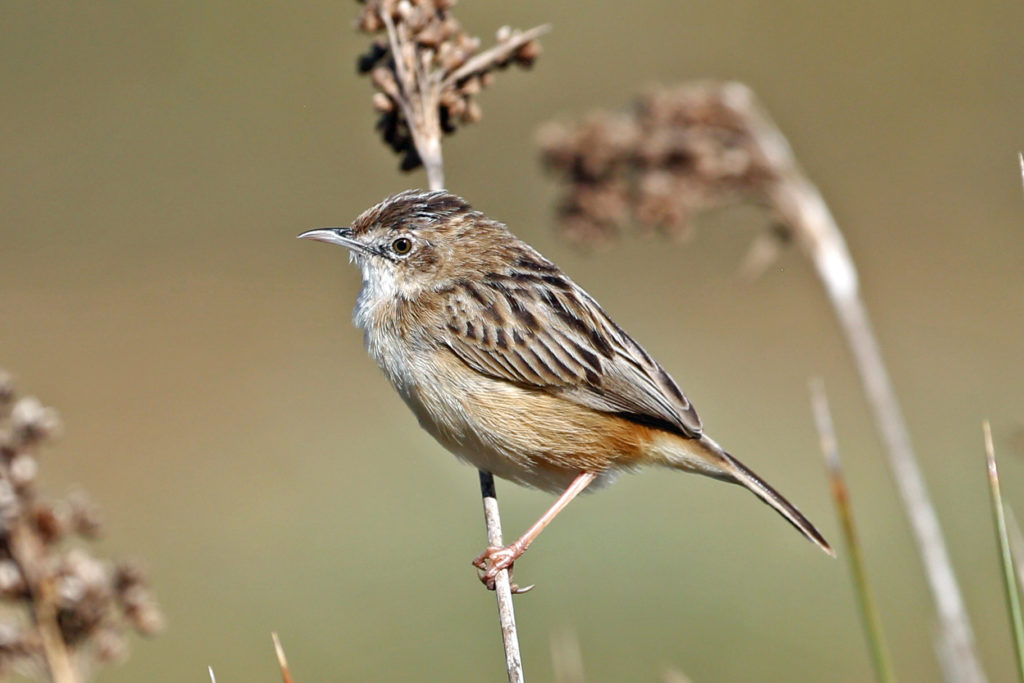 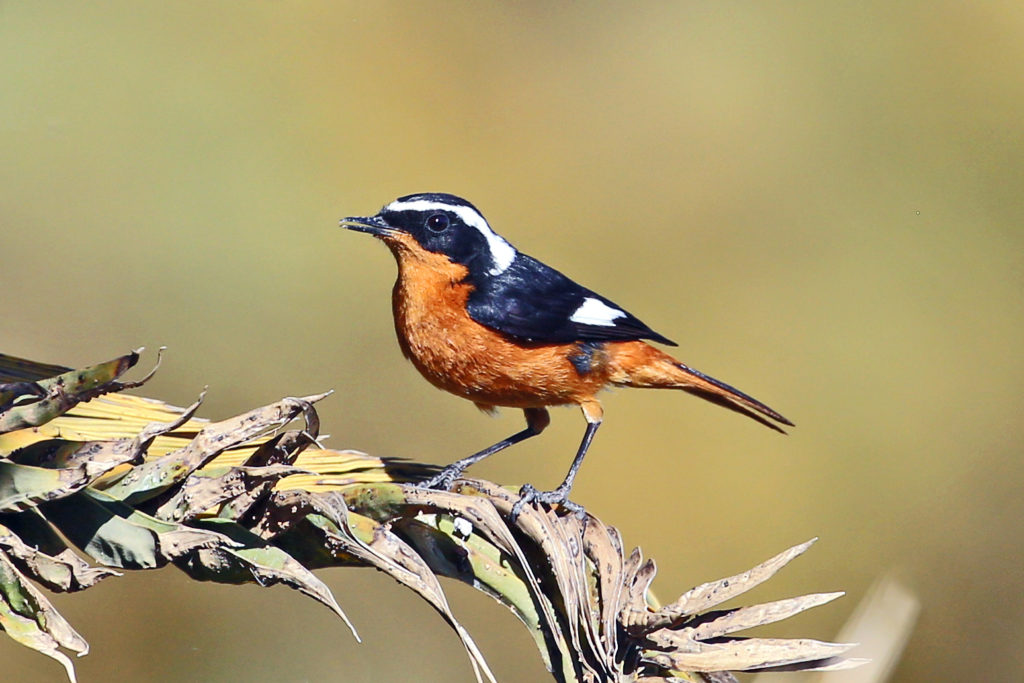 The following day we saw Laughing Dove aka Palm Dove and had another good view of the Tchagra. We also saw a number of familiar birds, including Stonechat, Grey Wagtail, Chaffinch, Goldfinch, Greenfinch, Linnet, Kingfisher, Grey Heron, Common Sandpiper, and of course, Bulbuls everywhere. As the light was so good they all gave us cracking views. In the afternoon we drove back to the coast and saw Audouin’s Gull and could not resist having another look at the Stone Curlews. The following day we had to return to Marrakesh but not before a visit to the Souss River close to Agadir where the birds we saw included Black-winged Stilt, Black-tailed Godwit and Greater Flamingo. The total bird count was 124 with approximately 40 ‘lifers’. 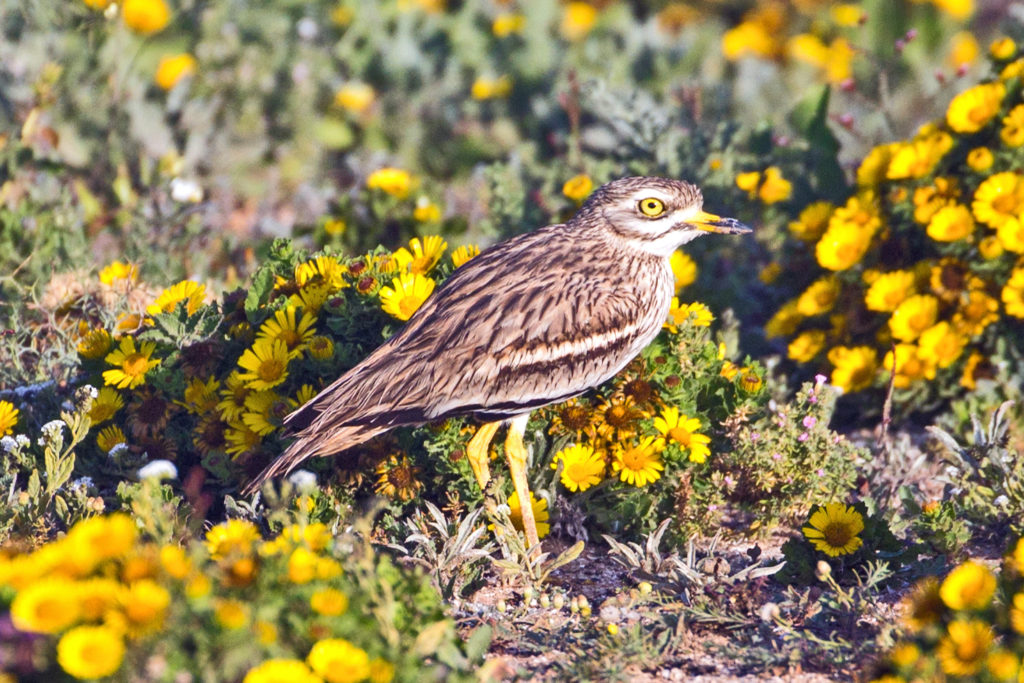 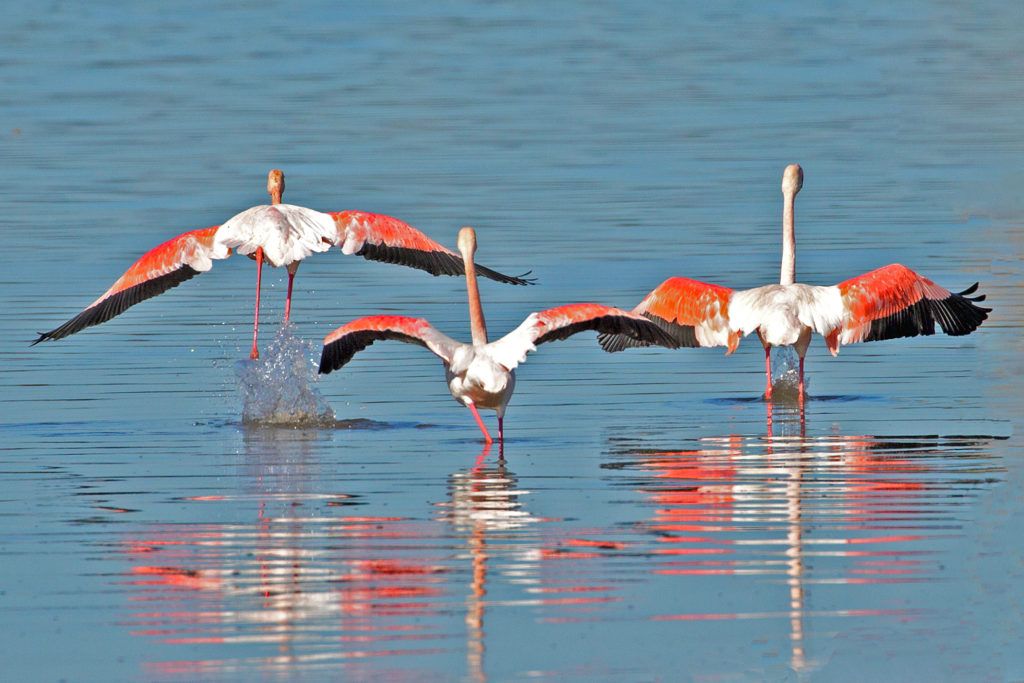 This was a truly wonderful holiday. Morocco is a brilliant place to visit as the landscape is so varied from snow- capped high mountains to the desert region and the western coastal area. Marrakesh is something different altogether with its bustling souks and apparently a good number of the local population intent on relieving you of your money. We all agreed that we would not wish to live there but a very different and exhilarating place to visit. The success of the holiday was due, in a large part to Brahim who is a fantastic bird guide and got us on to all the target birds. Hamid is an excellent and very careful driver who made us feel very safe during approximately 1200 miles that we travelled during the 11 days.