In December 2013 we took a holiday to North Goa. Not having been before we didn’t know what to expect only knowing there is a great variety of bird life. We went with “Jewel in the Crown” and stayed at the Marinha Dourada Resort, Arpora, a five minute taxi ride from Baga. This resort (hotel) has two large lakes, where White-throated, Stork-billed and Common Kingfishers are resident, and where pairs of White-browed Wagtails patrol the paths. Across the road from the hotel are two former rice paddies which are great for swallows, bee-eaters, mynas, egrets, and all sorts of other birds. I saw Short-toed Snake Eagle and Oriental Honey Buzzard fly over.

Earlier in the year I made contact, using the internet, with Lloyd Fernandes who does bird guiding trips called “Breakfast with birds”. We met up with Lloyd on our first evening. He came to our hotel and explained the tours he had in place for the two weeks we would be there. Having already told him that we needed to acclimatise to the heat we arranged to go to Bondla, a nature reserve, on the 20th, Carambolim Lake, woods & fields plus a raptor roost (23rd), a trip on the river Zuari and then Batim Lake (24th), Mayhem Lake (26th) and Morjim Beach on the 27th. The other days we filled in with our own itinerary visiting Baga hill & fields, Arpora woods and the Beira Mar Hotel, Baga, where you can sit, for the price of a drink, overlooking a marsh which was once a rice paddy.

Our first trip, to Bondla, started with an early alarm call as we were being picked up at 5.30. We had the company of John and Lisbeth Speich from Denmark. John is a bird group leader for Scanbird and he and Lisbeth had just finished a birding trip with a party of birders from Denmark with Lloyd. A one and a half hour drive got us to Bondla just after sunrise. A walk along the forest edge before one of Lloyd’s breakfasts gave us Indian Robin, Jungle Babbler, Common Iora, Dusky Crag Martins that had just left their roost, an old temple nearby, Malabar Pied Hornbill, Rufus Treepie, Vernal Hanging Parrott and Blue Face Malkoha to name just a few. After breakfast, where the ‘Mango Jam’ made by Lloyd’s family, is well worth a mention, we walked the road that runs through part of the reserve and got good views of Lesser Goldenbacks, Brown-capped Pygmy Woodpeckers, Asian Brown Flycatcher, Indian Golden Oriole and Asian Fairy Bluebird and more. Then a drive to the crocodile lake got us Orange-headed Thrush, Asian Palm Swift, Crested Treeswift and Black-naped Monarch, Spotted Deer but no crocs. In the reserve is a Zoo, not for the faint hearted as there are some large caged animals looking somewhat stressed but we were there to walk the grounds and look for wild bird life. Here we saw Greater Racket-tailed Drongo, Velvet-fronted Nuthatch, Golden-fronted Leafbird, Tricoloured Munia, Indian Peafowl and even a Grey Wagtail! We saw 66 species today including a few on the return journey.

On the 23rd, the day we went to Carambolim etc, the meeting time was a later 6.30, journey time an hour. On arrival, some birding before food, so telescopes up and view the lake. An Osprey and Gull-billed Tern were hunting; Indian and Little Cormorants sat in a tree with a Darter, three Blue-tailed Bee-eaters and two Pied Kingfishers. In the grass in front of us were Bronze-winged and Pheasant-tailed Jacanas. On the lake were hundreds of Lesser Whistling-ducks. In the small wooded area along the footpath Lloyd found an Asian Paradise-flycatcher to go with the Orioles and Sunbirds we had seen. At breakfast John noticed an Eagle sat in a tree at the end of the lake, this cause some debate between Lloyd and John…is it Indian Spotted or Greater Spotted Eagle? Not that I knew but either of them would be yet another new bird. When the said bird flew towards us it was clear to see it was a Greater Spotted…so they both said. It was the length of the gape! A walk into part of the wood got us Shikra and Jungle Owlet. As we left the lakeside we saw that twelve

Glossy Ibis and six Asian Openbills had flown in whilst we were in the wood. We were then driven to a small village where Lloyd knew of a couple of interesting bird. After a short walk Lloyd pointed to a tree which had a hole in it, and then, as if by magic, two Spotted Owlets popped their heads out. Further on, high in a tree a Brown Hawk Owl was found. The next place we were taken was an area of farmland. We walked a path between two fields. A few birds made an appearance such as Plain and Ashy Prinia, Blyth’s Pipit, Zitting Cisticola and the rarer Malabar Lark. Overhead a pair of Lesser Adjutants, India’s version of Marabou Stork, were seen. Onto the last stop of the day, a raptor roost. Not all raptors as a Spotted and a Red Collard Dove sat in a tree with an Indian Roller. Also around were Hoopoe, Siberian race Stonechats and Woolly-necked Storks. The only raptors to make an appearance were Booted Eagle, Pallid and Montagu’s Harriers.  76 species were seen today.

Tuesday 24th and off to the river Zuari for a half day trip with a stop off at Batim Lake on our return journey. Up river to start with to view a dozen Greater Crested Terns roosting on

posts. Kingfishers were the main reason for the river trip and they didn’t disappoint. We saw five Black-capped, two Collared as well as numerous Stork-billed, White-throated, Pied and Common. A variety of large birds were on the tree lined banks of the river. Purple and Grey Heron, Painted and Woolly-necked Storks, Great, Intermediate and Little Egrets and Black-headed Ibis. We got close to a feeding Osprey and a resting Brahminy Kite. On the mud were plenty of waders including Terek and Common Sandpipers along with Grey and Pacific Golden Plovers all keeping a safe distance from the Mugger Crocodiles. At Batim Lake, we looked for Indian Spot-billed Duck. John and I tried to find one amongst the Lesser Whistling-ducks but after finding only Little Grebe, Garganey, Teal, Shoveler, and Wigeon we had to ask Lloyd if he could see one. He soon picked one out. A good job as soon after a Marsh Harrier followed by two Shikra paid a visit causing a bit of disruption. 51 birds today.

On Boxing Day we went to Mayhem Lake. Today we were joined by four more Danish birders along with John and Lisbeth. The lake is used for recreational boating, so no self respecting bird uses it but the wooded area around it is full of birds. Lloyd said it is the best place to see a Jungle Nightjar! Indian Yellow Tits followed by Ashy Prinia, Purple-rumped and Purple Sunbirds were all seen around the car park. Further on we were treated to a selection of Drongos. Greater Racket-tailed, Ashy, White-bellied and Bronzed were all seen within a fifty yard stretch.

In a large tree were found a Crested Hawk Eagle and Asian Koel. White-checked Barbets were seen and Coppersmiths Barbet heard. The birds were coming thick and fast. Black-naped Monarch, Asian Paradise-flycatcher, Tickell’s Flycatcher, Brown-cheeked Fulvetta, Little Spiderhunter, Blue-tailed and Chestnut-headed Bee-eaters.  We had reached the end of the path and had to return the way we had come. Puff-throated Babbler and Malabar Whistling Thrush were seen as we walked back. I was thinking about the Nightjar and asked if we had missed it. Lloyd said we had passed the area where it roosts but he didn’t see it and would give it a better look as we returned. Having reached a small clearing with a few small trees, Lloyd went walkabout and after five minutes or so he came back smiling.

The bird had not used its usual roost and in fact had moved nearer the path, so once the tree was pointed out it was easy to see, sleeping on a branch. 52 species today.

Our last time out with Lloyd was to Morjim Beach. Not so many birds today, 36 species in all but some good quality ones nevertheless. The beach is a good place to see Small Pratincole and so it proved. These small birds nestle down in the sand to rest after hawking for food and it seemed they had eaten. We soon had very good views of them along with Paddyfield Pipit, Lesser and Greater Sand Plovers and Pallas’s, Slender-billed, Brown-headed and Heuglin’s Gulls with a sprinkling of Lesser-crested Terns. Behind the beach, in trees, six Indian Grey Hornbills were feeding and on the ground were three Southern Coucals and six Rose Coloured Starlings while Ashy Woodswallows and Green Bee-eaters were feeding    overhead. We went further along the beach road to where the grassy dunes started and there, being harried by a Black Drongo, was a Bay-backed Shrike; a Barred Buttonquail was seen scuttling across the sand into bushes disturbing two Red-wattled Lapwings.

We paid several visits to the Beira Mar Hotel during our stay but never saw the ‘must see’ bird the Cinnamon Bittern but other birders staying there had seen it on three occasions.

We saw plenty of other birds, having first bought a ‘ticket to watch’…a beer from the bar, including Plum-headed Parakeets, Scaly-breasted and White-rumped Munia, Oriental Magpie Robin, Little swifts and a Long-tailed Shrike. There’s a pair of Spotted Owlets that appear there most evenings. Our walks to Baga hill and fields got us Small Minivets, Clamorous Reed Warbler, Pied Bushchat, Richards Pipit and White-spotted Fantail, plus on two occasion a Black Eagle! Our walks around Arpora Woods gave us good views of Crested Serpent Eagles, Coppersmiths Barbets, Indian Blackbird, Black-hooded Oriole, White-browed Bulbul and many of the birds already seen on our travels.

A good holiday….with 196 species seen of which I had 95 life birds. 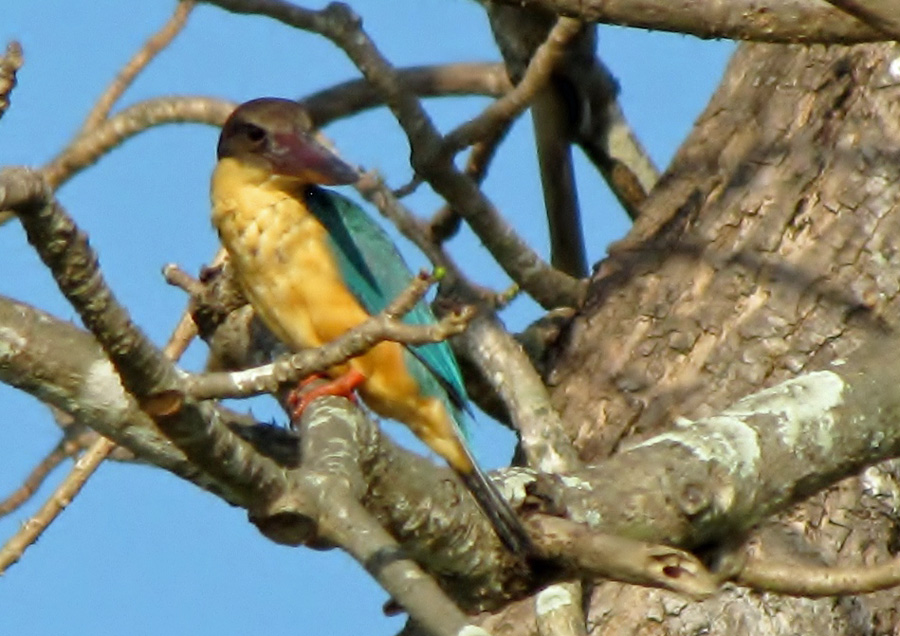 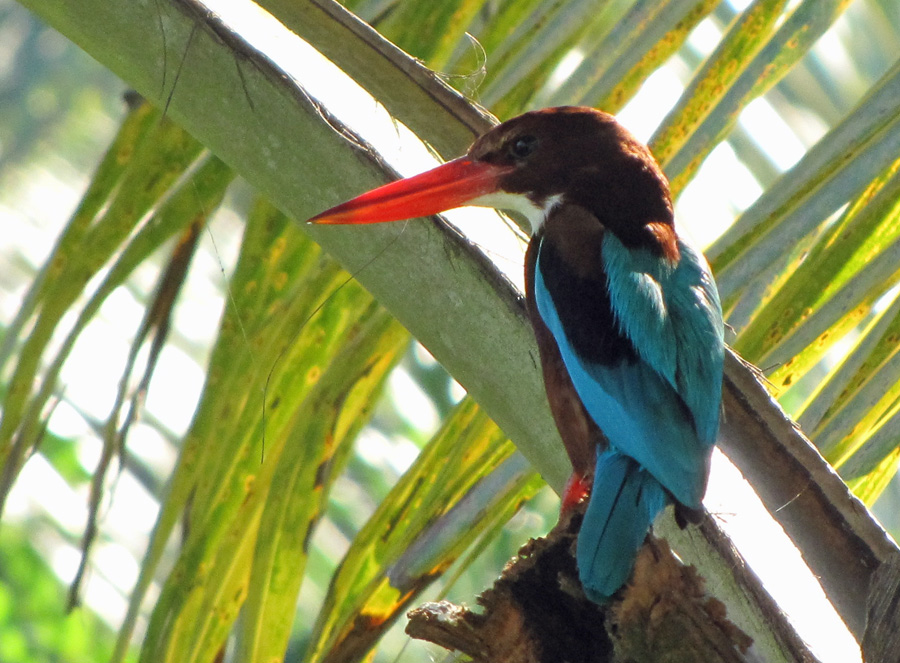 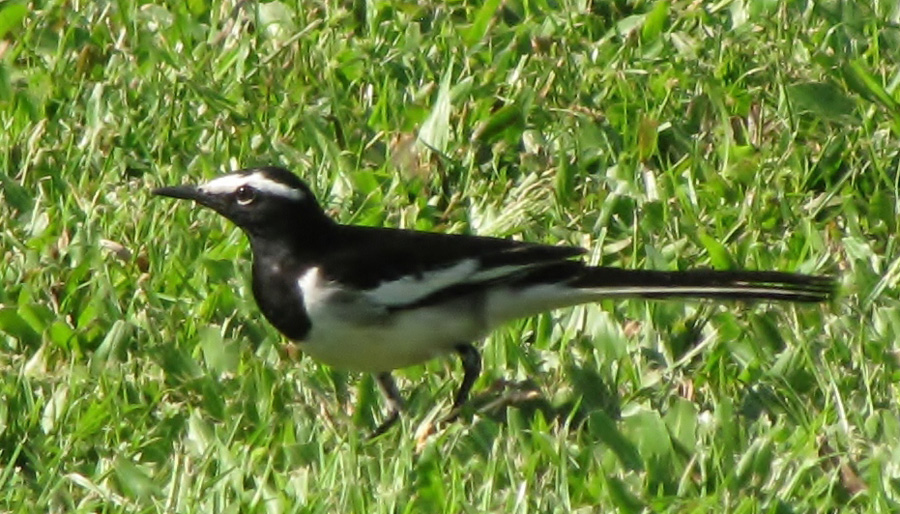 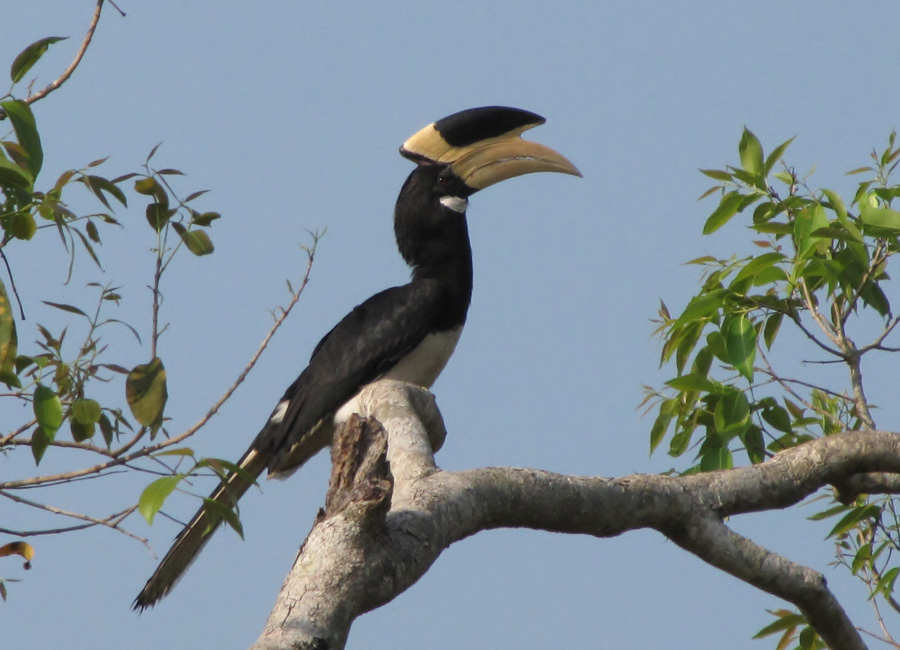 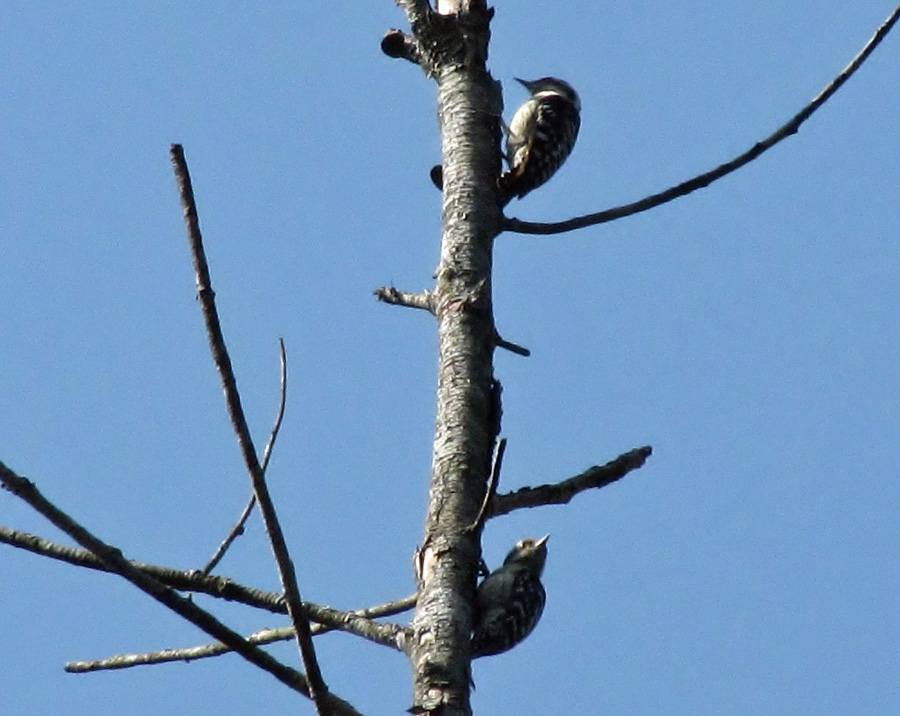 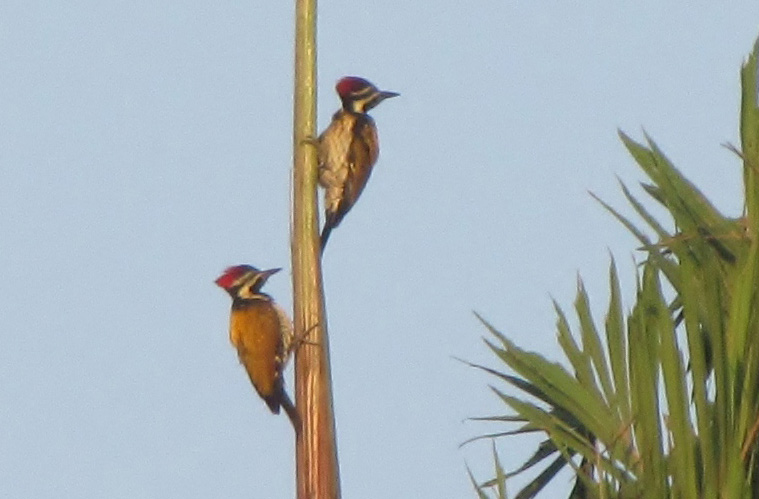 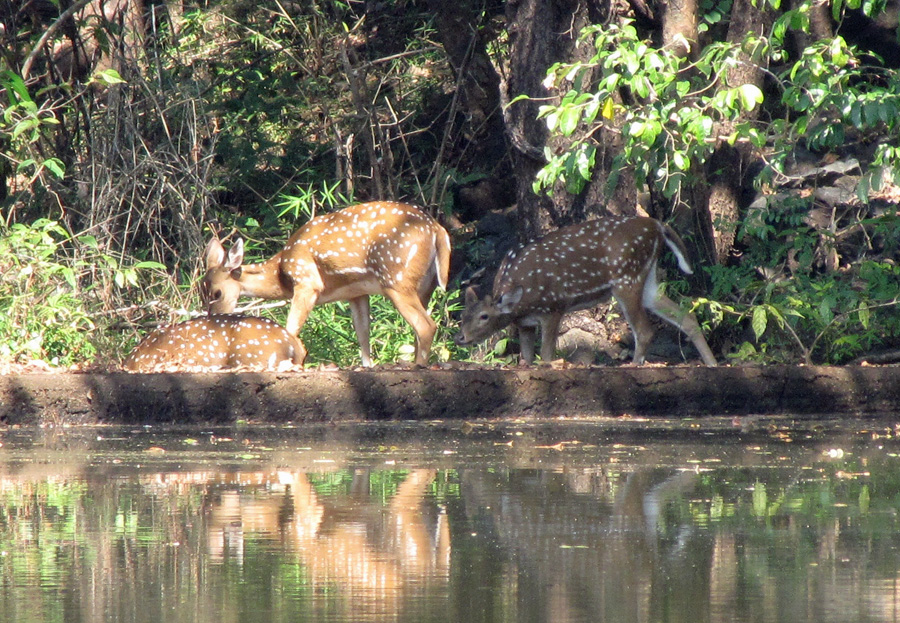 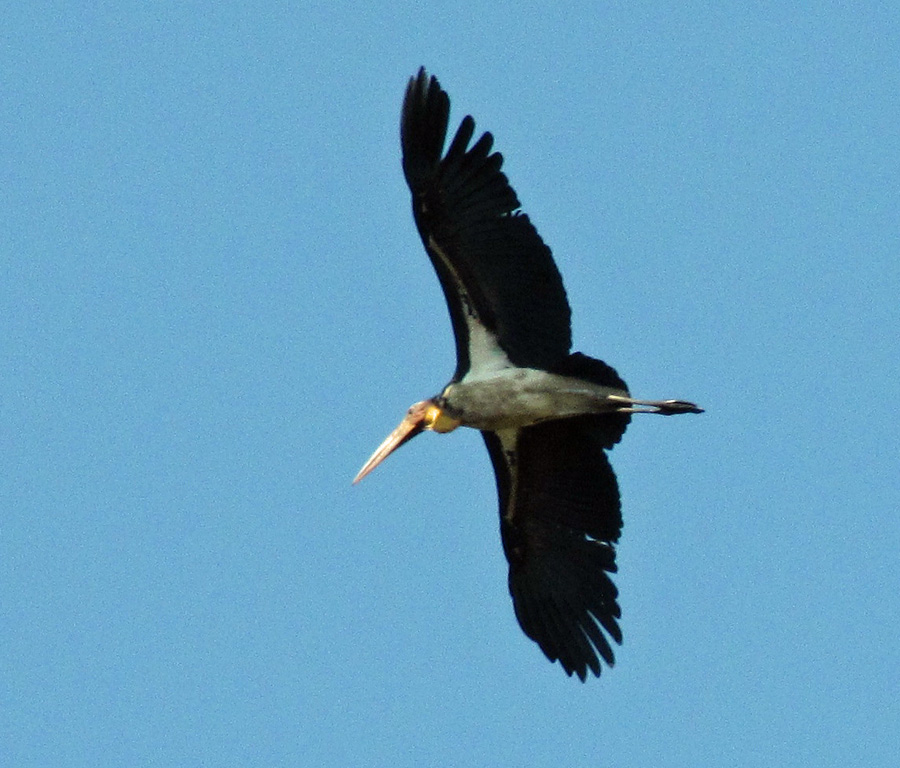 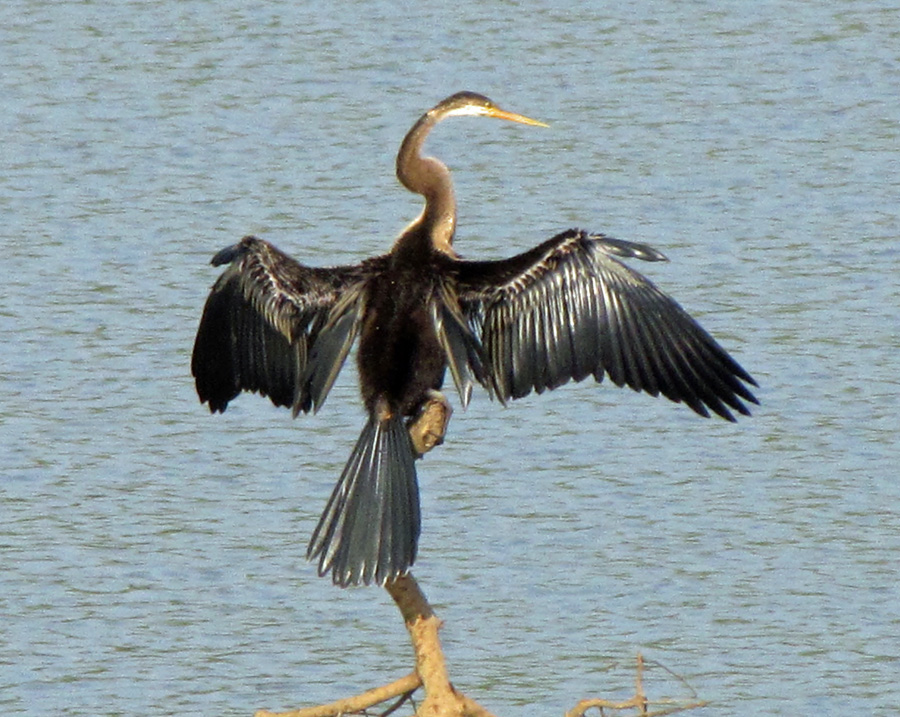 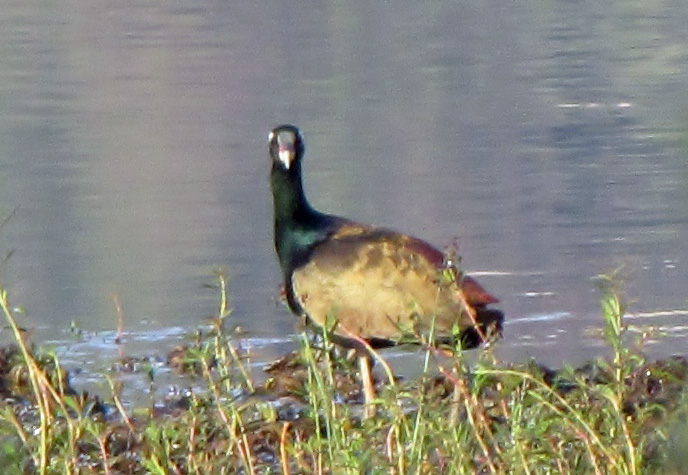 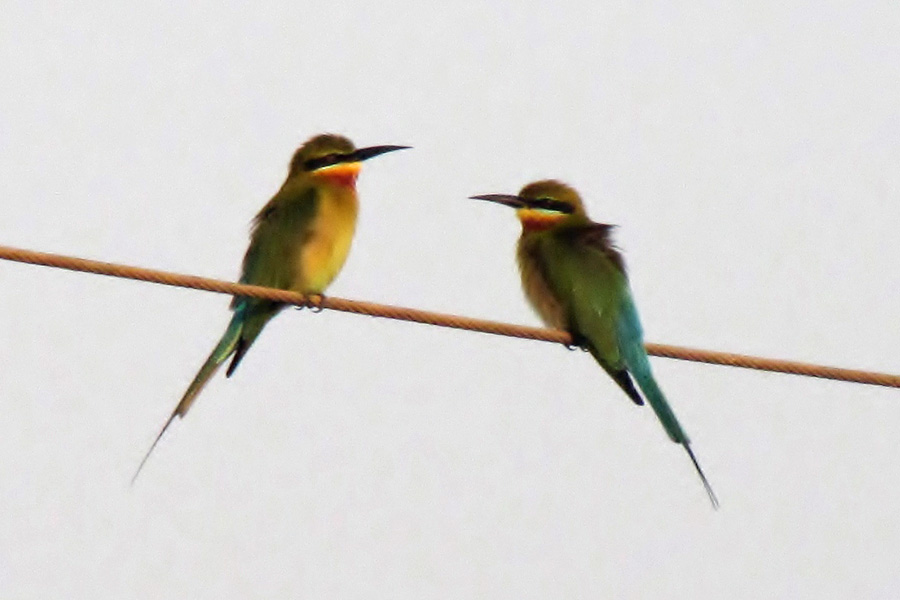 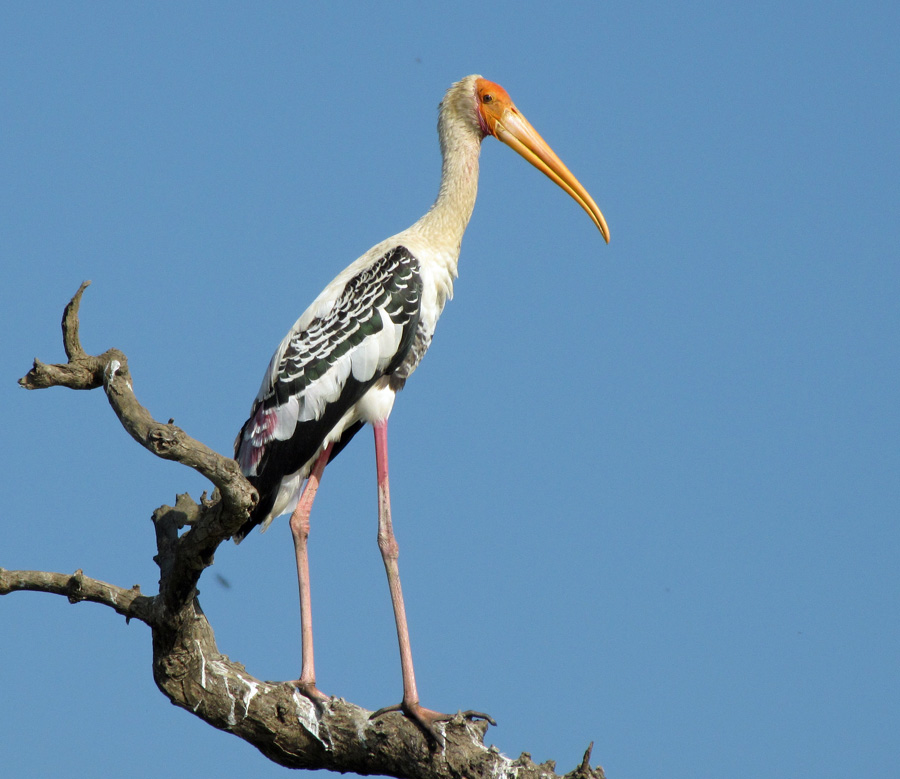 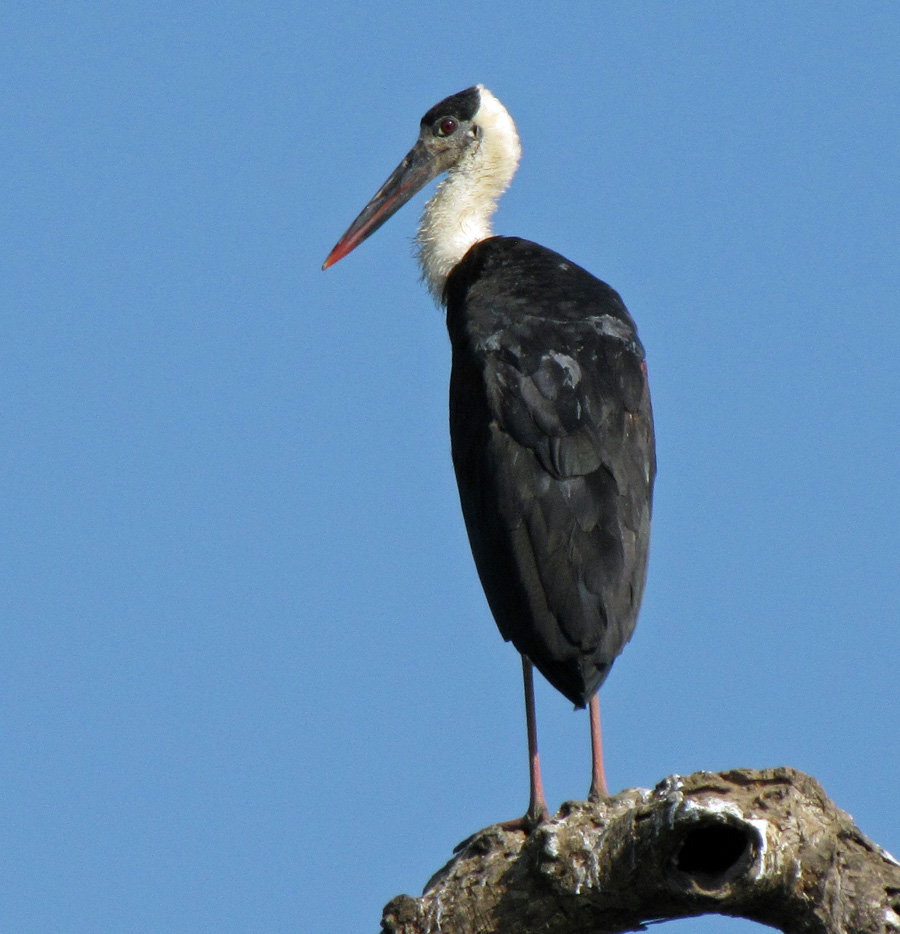 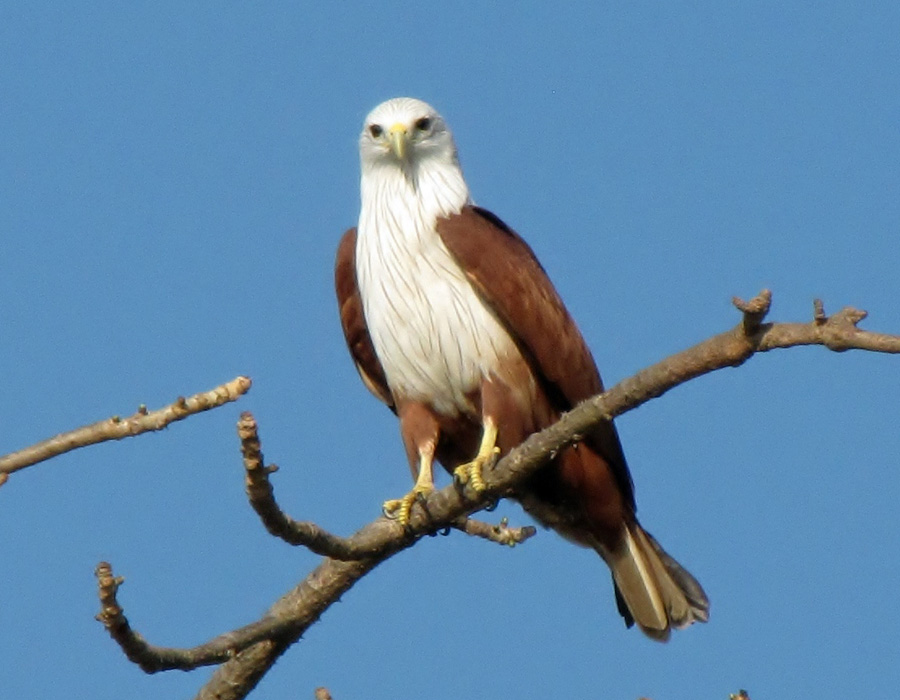 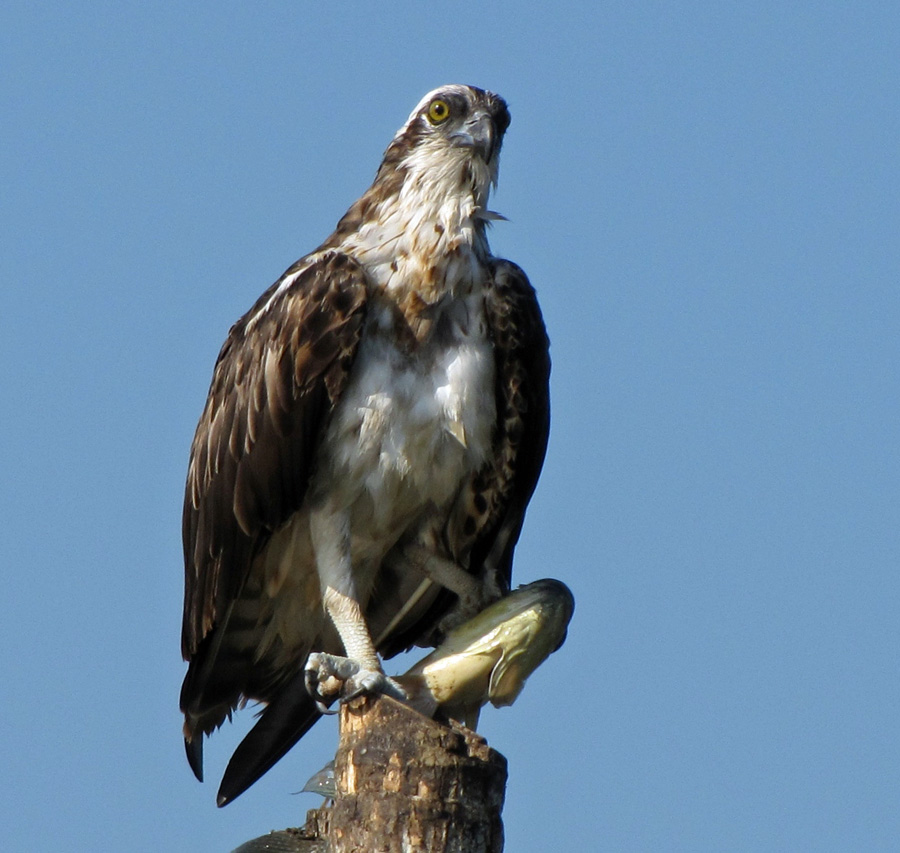 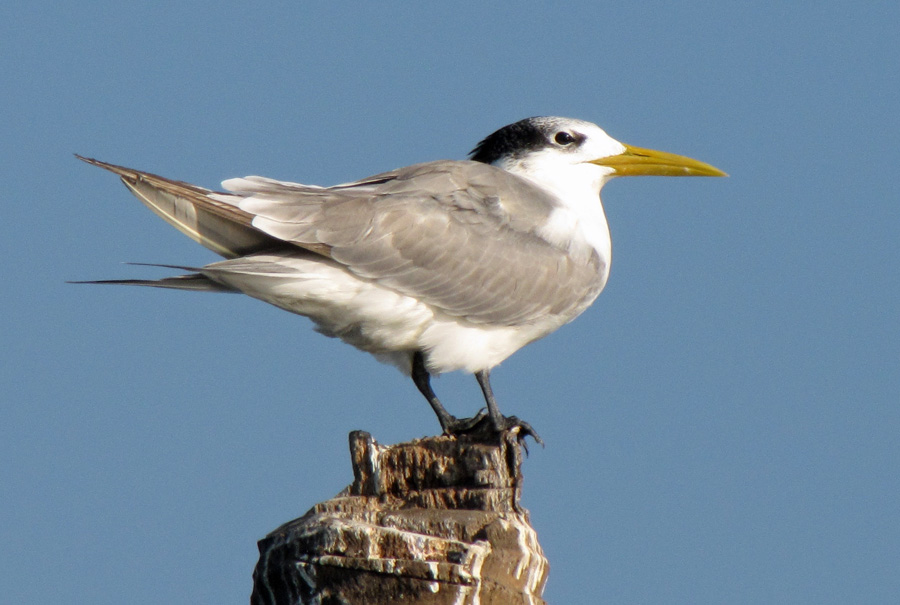 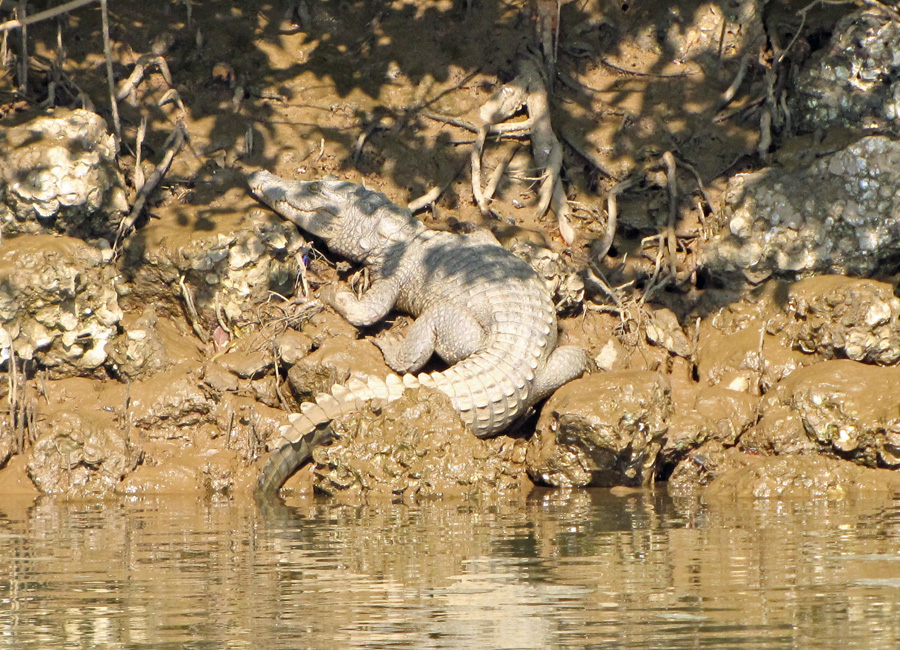 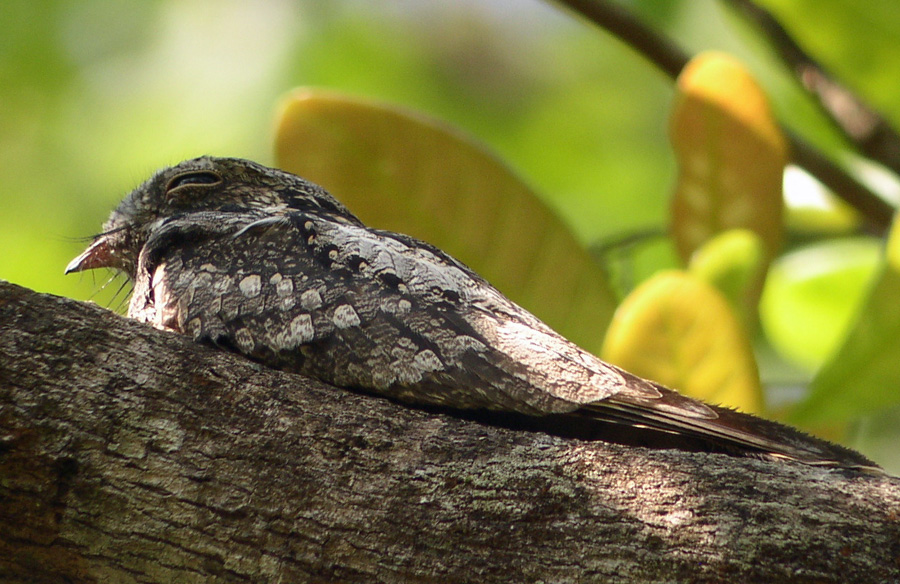 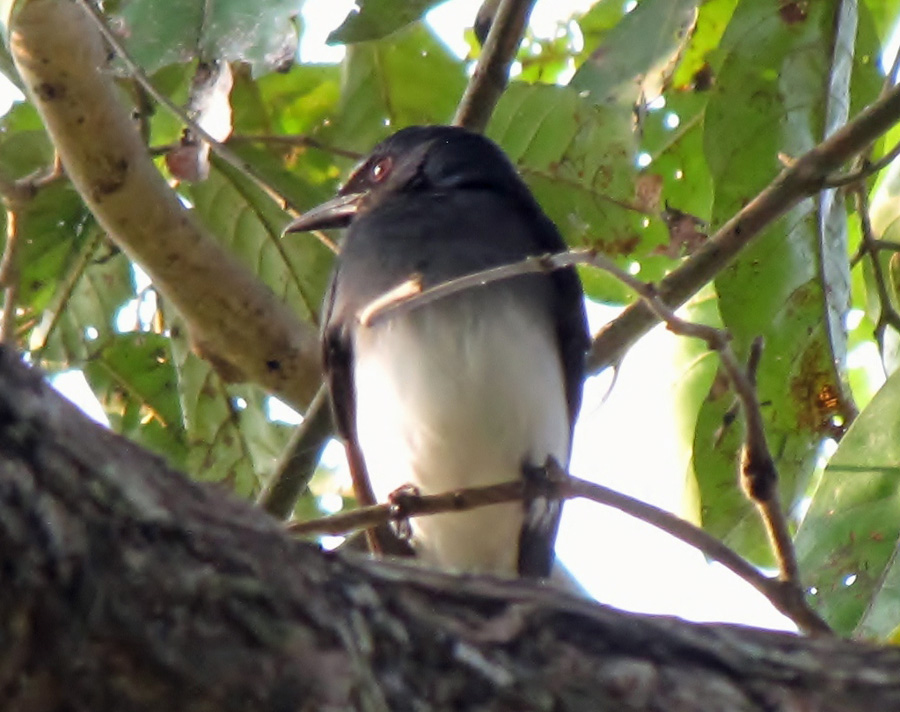 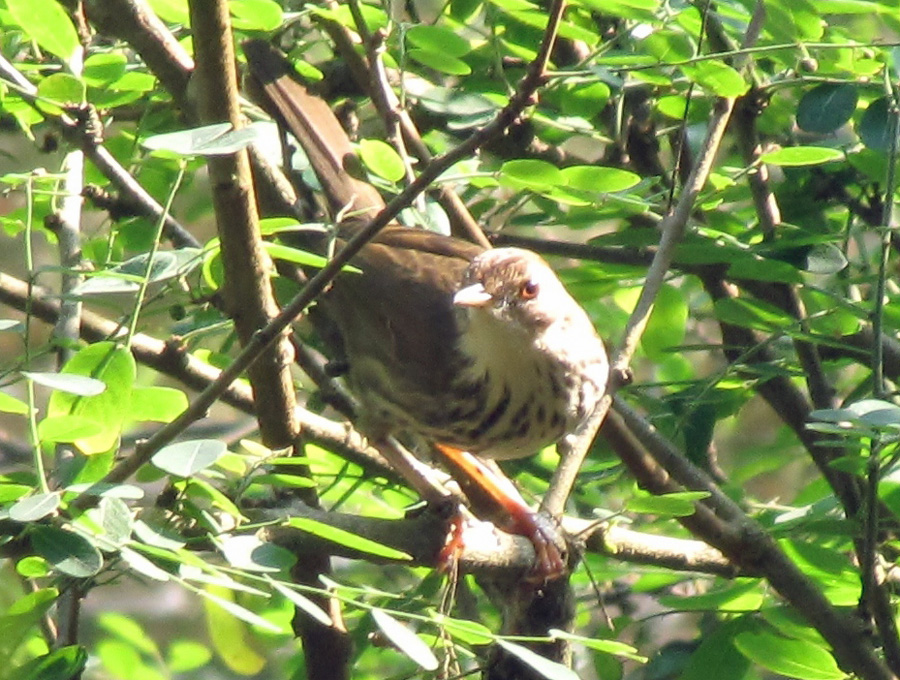 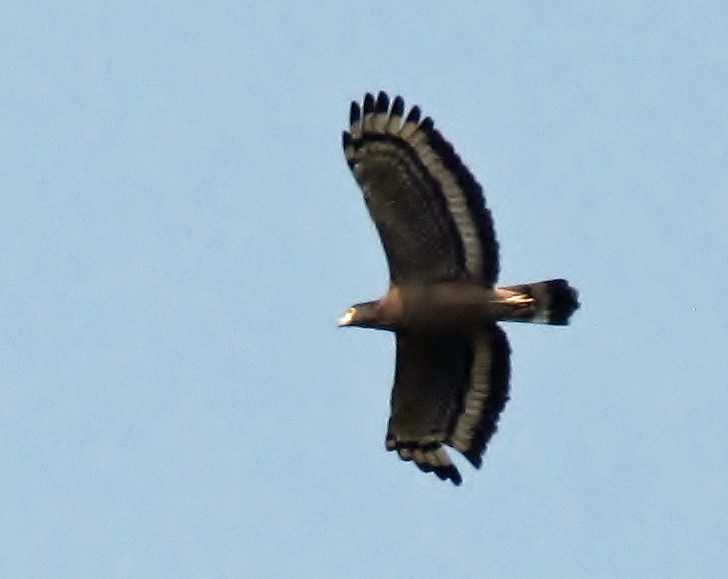 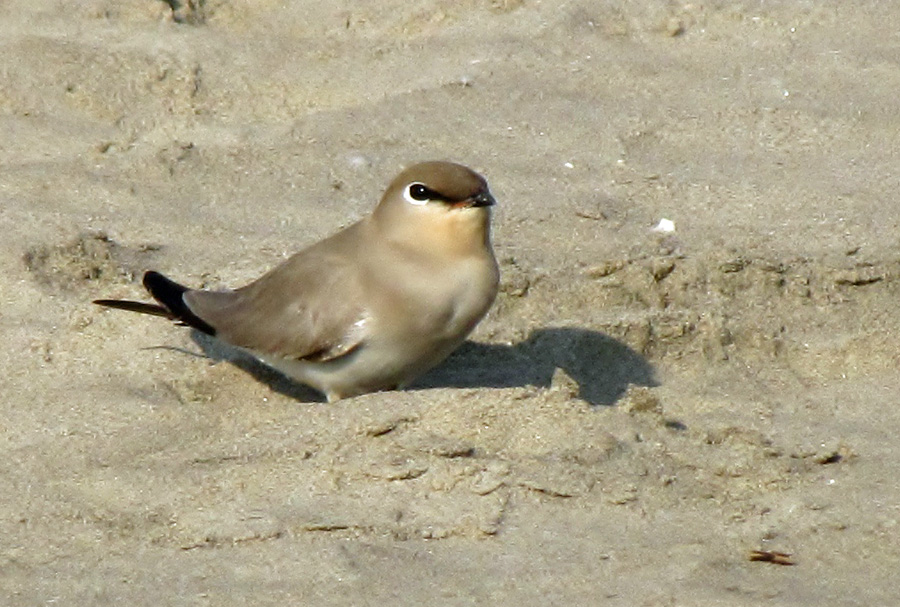 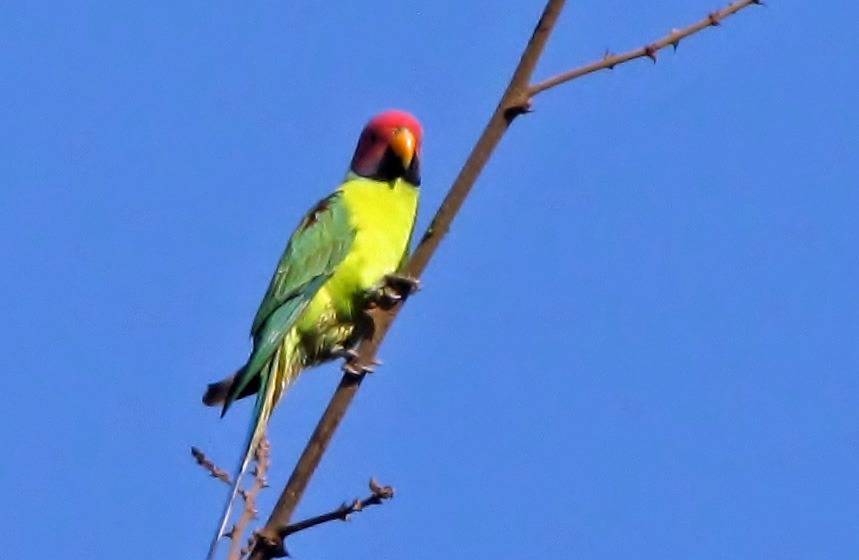 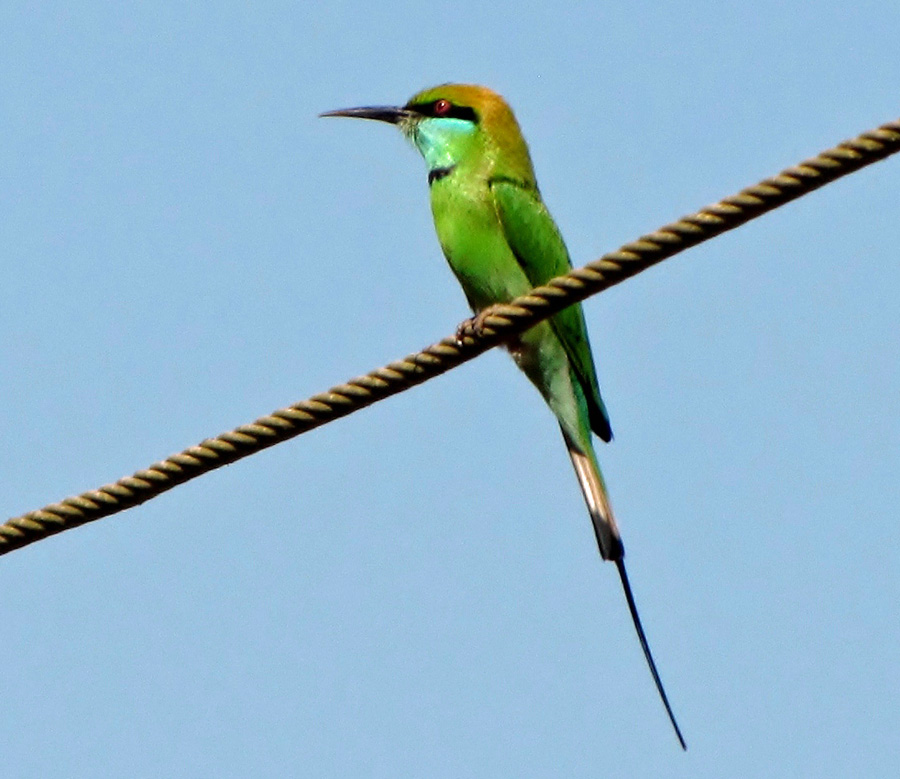 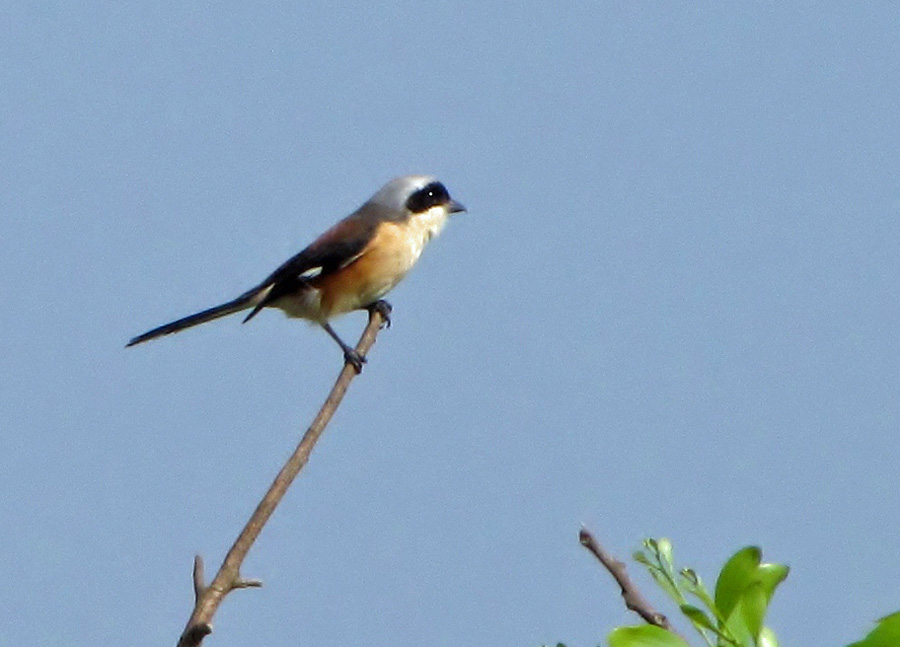 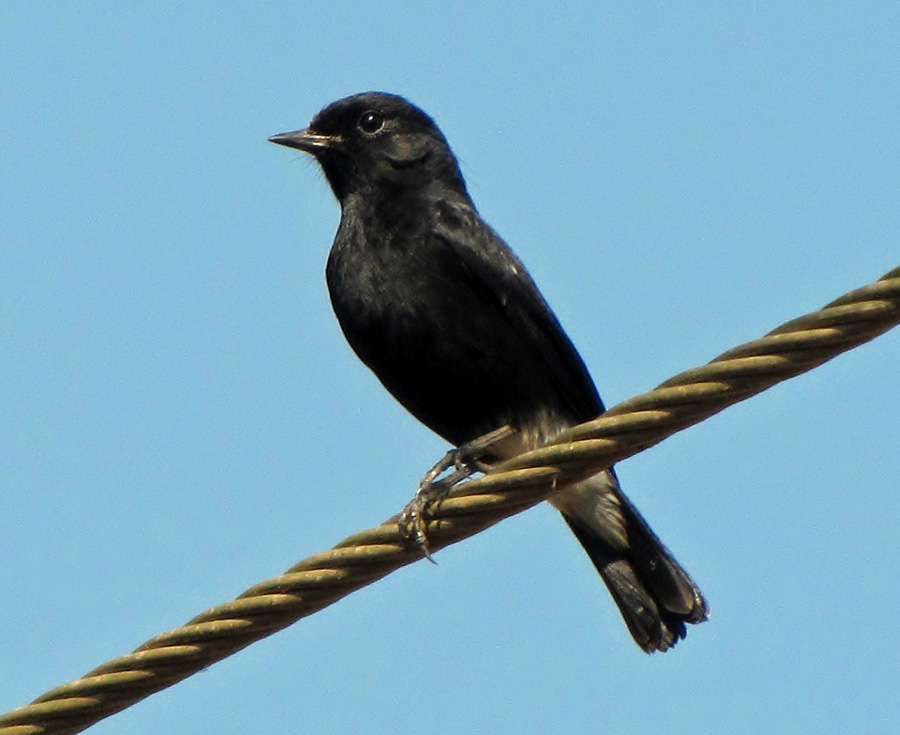